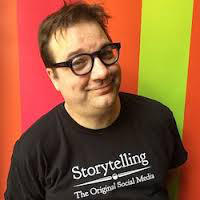 By Kevin Cordi Challenges to Those Who Respond with Story – A Call Out to Storytellers One must continually reflect when they chose to take on the ‘mantle of storyteller’ or decide to use stories in their work and daily life. For over 25 years, I work to honor this mantle. This includes not only …

ABC News | December 28, 2019 By Hakyung Kate Lee The country has launched a program to nurture female seniors as storytellers. SEOUL, South Korea — Park Jeonghee, 64, donned a traditional Korean dress embroidered with tiny flowers and sat down in front of a class of preschoolers. Children gathered around her, their eyes twinkling …

Storytelling In Times Like These The focus of this teleconference is on storytelling as a pivotal instrument to spark interest in social change. Storytelling is an integral part of our consciousness. In the best of times it is sent forth to nurture our dreams, aspirations and our ability to think highly of ourselves and others. In …

Lee Ellen shares from her experiences as educator and arts administrator for the Suicide Prevention and Crisis Service in Ithaca, NY., and specifically how she utilizes storytelling to educate the community and reach the populations in crisis, and support those left behind. Recorded November 10, 2015

Learning to Care and Listen. Hear about how a story-based approach has informed the creation of a “Caring Corps” and Cindy’s work with 4th graders and their parents at a Boston area synagogue and school. Cindy teaches children skills in listening, interviewing and reflection while they learn about offering support through life cycle events …

Living Out Loud. The exploration and expression of the self can be fraught with fear and anxiety. We are so often concerned with how our stories will be met by the world that we silent our voices. This teleconference discusses the things we fear: ridicule, judgment, failing, being vulnerable, feeling incompetent, being misunderstood and being …

Michael McCarty, Susan O’Halloran, Lilli Pang, Emily Lansana, Lani Peterson This teleconference gives you a sneak preview into some of the Healing Story gems that will unfold at the NSN Conference in Kansas City the third week in July. The focus of both HSA’s Wednesday night Concert and Thursday morning Pre-Conference is Social justice. Whether …

Summary: “Vasilissa, the Priest’s Daughter,” is in the Afanase’ev collection. The title character is not at all interested in “womanish” things. She has dressed in male clothes since childhood, goes hunting with the guys and calls herself Vasily Vasilyevich, which means Basil, son of Basil. The tsar hears a rumor that this guy is a …

Tales of a Parrot: Of a Brahmin Falling in Love

When the sun sunk into the west and the moon appeared in the east, Khojisteh went to the parrot to ask leave and said, “O thou wise bird, whose counsels are prudent and who acts the part of a friend! If you think it adviseable, delay not today in giving me permission, or else speak …

Tales of a Parrot: Of a Brahmin Falling in Love Details »

Princess Who Becomes a Man

This droll story is of Hindu extraction, and in much the same form is still current in Southern India. In the “Exposition” prefixed to the Dubois’ French translation of the Tamil version of the Panchatantra, p. 15, it is given with a few unimportant variations: The name of the king is Nihla-Keton, his country is …

Princess Who Becomes a Man Details »

The Girl Who Pretended to be a Boy

Once upon a time there lived an emperor who was a great conqueror, and reigned over more countries than anyone in the world. And whenever he subdued a fresh kingdom, he only granted peace on condition that the king should deliver him one of his sons for ten years’ service. Now on the borders of …

The Girl Who Pretended to be a Boy Details »