Shlemiel woke up one day and looked around his little house. The kids were busy playing video games. His wife was already starting to scold him for being lazy. The dog had peed – again – on the kitchen floor. Enough already, he thought. There’s got to be a better place than Chelm for a man like me. He took some bread and an onion and told his family he was heading for Warsaw. The kids barely looked up to say goodbye. His wife was banging her wooden spoon in a threatening manner. The dog was growling. Shlemiel was glad to leave the place. 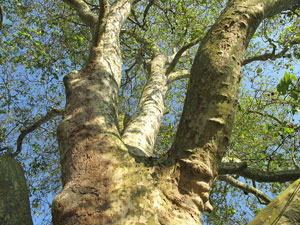 He walked through the village and everyone he saw asked where he was going. “Warsaw,” he said. “I’m heading to the big city. Enough of this village life – you can have it. You know the old proverb: if you only go where others have been, you’ll only see what others have seen.” He walked about a kilometer and then felt tired. He wasn’t used to working and he wasn’t used to walking. He found a shady spot under a tree and settled down for a nap. When he woke up he would continue on the road to Warsaw. He took off his battered old shoes and stretched out on the ground for a snooze. Then he sat up again. What if he forgot the way he was heading? How would he remember the way to Warsaw? That’s when Shlemiel had a great idea. He pointed his shoes in the direction he’d been walking. That way, he would know which way to go when he awoke. And so Shlemiel fell into the deep and happy sleep of a man who is on the high road to adventure.

But while he was sleeping, as my Romanian grandmother used to say, something happened. If it hadn’t happened, how could I tell you about it?

Before I do, I should mention that I told this story in my Tuesday storytelling circle at Baycrest Health Sciences, where I work as the storyteller-in-residence. Every Tuesday afternoon, we have a gathering in the library. There’s a bit of wheelchair choreography as 20 – 30 people show up from the hospital, the nursing home, the community. After a few minutes, we somehow fit everyone in. We have patients, residents, caregivers, neighbours, family members: a wide range of people from what I think of as our village of storytellers. We always have a lively exchange of stories, from folktales to personal experiences, from family memories to stories of the Holocaust, from anecdotes of Toronto’s Kensington Market to Filipino proverbs. I try to tell stories that will spark more stories, and each session becomes a live, impromptu weaving-together of the narratives that are conjured as people listen to each other.

Many of the people in the group have degrees of impairment. There are men who have suffered grievous strokes, men and women with Alzheimer’s, a wide range of the mental and physical frailties that accompany old age. Encouragingly, the one intact organ that virtually everyone still has is a sense of humour. For a group that wheels and walkers their fragile way into our haimishe (Yiddish: cozy, homey, intimate) library space, there are surprisingly many moments of joyous, unrestrained laughter.

A farmer had seen Shlemiel go to sleep under the tree and also how carefully he’d pointed his shoes down the road. He came over and turned them around to point back to Chelm. When Shlemiel woke up, he took note of the direction his shoes were pointing, put them on, and walked about a kilometer. That’s when he began to feel strange. The outskirts of Warsaw looked a lot like what he remembered of Chelm. People began to greet him: “How are you, Shlemiel? That was a short trip.” He was puzzled. How did the citizens of Warsaw know his name? He walked down a street and came to a house that looked oddly familiar. A woman came out and welcomed him. She sounded just like his wife on a good day. Before he knew it, he had walked into the house. There was a nice smell of chicken soup. It smelled just the way his wife’s soup smelled. There were children in the room. They stopped playing long enough to say, “Hi papa.” Even the dog came over and licked his hand. How was this possible? Chelm and Warsaw seemed to be the same, though Warsaw did seem a little nicer.

The story doesn’t say what happened next. Did he ever figure out that he never did make it to Warsaw? Did things get better in Chelm after his brief adventure? Some versions tell us that every night he told his “Warsaw” wife and children stories about his distant-but-never-forgotten Chelm family. He didn’t want to dwell on the unpleasantness that made him leave in the first place, so he made up stories about how kind and sweet they used to be. Strangely, as the children heard these tales, they stopped playing video games all the time and began to talk to their father more. And his wife stopped scolding him as much. And the dog finally got house-trained, just like the Chelm dog used to be – at least in the stories Shlemiel made up about him. And in the end, even Shlemiel couldn’t remember where he was, and it didn’t really matter anymore. Home is home, even if you no longer quite remember where it is or if you ever left or how you got there in the first place.

My listeners, including those with Alzheimer’s, laughed and laughed. They, too, are on a journey that has led them away from the familiar. They, too, sometimes don’t know where they really are. And, just like with Shlemiel, their stories have become necessary landmarks and beacons, sources of reassurance and meaning even when other connections have become attenuated and broken. And so every Tuesday we tell each other stories about our many homes, and stories about places so distant there is no map that can still lead us there. 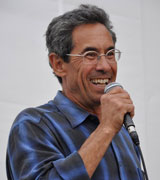 Dan Yashinsky is a Toronto-based storyteller. He currently works as the storyteller-in-residence at Baycrest Centre for Geriatric Care. He is the author of Suddenly They Heard Footsteps – Storytelling for the Twenty-first Century, and Swimming with Chaucer – A Storyteller’s Logbook. In l999 he received the Jane Jacobs Prize for his work with storytelling in the community.