In 2012, as a result of walking away from a high-demand religious community, I went through a number of traumatic experiences that included bullying and isolation from those I loved. These events hurled me into a clinical depression as well as unemployment. With no financial resources, I was unable to pay for a therapist and medication was only a slight help. When I understood I would have to deal with the depression on my own, I prescribed for myself storytelling therapy. I had been writing for nearly two decades by then and had recently met Jasna Held, a professional storyteller in Croatia. I started writing roughly one story a week for nearly a full year, choosing topics that were relevant to me at the time or, occasionally, just letting my mind wander in fairy-tale like settings to see where it would lead me. A year later, in 2013, I emerged through to the other side of depression. I weathered a divorce, established a new home for myself and my children and found another job. I have not had a relapse since – and continue to write and tell stories whenever possible. This specific story was written early on in my healing process, and was prompted by a quote from Jacob Needleman: “Our primary drive as humans (…) is hunger for meaning.” What kept me going for much of the time, regardless of the chaos of loss and depression, was the hope of finding an appropriate way to satiate the hunger of my soul.

Fairly near, there lived a princess whose parents had recently died and left her all their fortune and lands to look after. But the princess was consumed by one thought alone – what she would eat now that there was nobody to order her about the proper course or composition of meals. She was starved from small portions, tired of always minding her manners, and irritated by somebody else preparing her food all the time. She let off the cooks and their helpers, and went about fixing a meal for herself.

She was, however, a princess, and though she knew many fine things such as how to make embroideries, how to ride fine stallions, and how to dance like a fairy, she had no idea how to cook. Still, she rolled up her sleeves and set to work. She took the ingredients out of the larder and pans out of the cupboards, and began to cook. Unfortunately, day after day all she got was a grey mush on her plate. It was sticky, a little burned, and tasteless no matter what ingredients or condiments she used. She tried adding aged wines with her lumpy meals, as well as the fine china and sparkly candles, but to no avail. Whatever she prepared was hardly edible, and the worst thing was that she seemed to eat the very same muck day in and day out. After a while, she became emaciated, her hair thinned, and her nails crumbled. 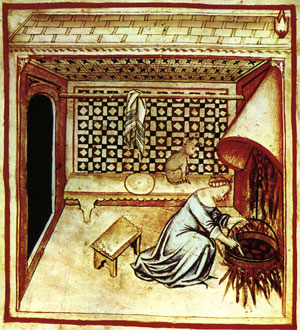 Since that would not do for a princess, she ordered her kitchens to be closed down and locked, and went in search of fine cooks around her kingdom. She searched far and wide, and had all sorts of people come to cook for her. Now, none of these were bad in themselves, but knowing they were cooking for royalty made them offer her complex, spicy, and opulent dishes that rarely agreed with her stomach. The princess would binge on the wonderful food, but after a day or two she would become sick, and send the cook to the gallows.

Then she fasted for several days until she got better, and hastened to look for another one. Soon, there were hardly any cooks left in the country, and she had to import new ones from foreign lands. Although refined, their skills were extremely expensive, and her treasury was quickly emptied, though she managed to eat well for a time and even got a little plump. Just then the neighboring king decided to take advantage of the situation, and led his armies to conquer the princess’s lands, forcing her into exile and poverty.

Now the princess was desolate. Not only was there no proper food any more, but more often than not, there was none at all. Hungry and desperate, she wore rags and went begging from door to door. Sometimes she got a morsel or two, though oftentimes she went to bed shaking with hunger.

Occasionally she would stand in line with the other poor to be fed by some kind people, or she would wait for the public feasts to be over, to get the leftovers. With time even this became insufficient, especially during wintertime, when the feasts were held indoors. She therefore resorted to the last option of the starving – theft.

The once princess now sneaked around other people’s houses and stole bread or pies left out to cool. She broke into sheds and took sausages from the smoking racks, and did not think twice before entering orchards or gardens to pluck fruit and vegetables sown by others. It could not go on for long, of course, for just as she was no cook, she was not a proper thief either. In only a matter of months they caught her while she was sneaking through the back door into a kitchen of a reputable inn. The proceedings were quick and merciless – she was to have her right hand cut off first thing next morning, so she would not think of stealing ever again.

Just as her arm was tied to a wooden stump and the executioner’s axe went up into the air, there came a wealthy woman dressed in red and stopped him with a velvet purse full of silver coins. The man took it and left, upon which the woman untied the princess and told her to follow. She was the owner of the inn from which the princess wanted to steal, and took pity upon the poor but obviously well-bred girl. The woman in red took her to the inn, had her cleaned, dressed, and fed, and made her into a servant.

The princess now worked day and night, helping with the various chores needed to run an inn. She swept floors, set tables, made beds, washed dishes and even, from time to time, groomed horses. Whatever work she was given she did without complaint, for the food she got was excellent and the little room warm. Being satisfied with her, the owner eventually allowed her to help out in the kitchen where she chopped, scrubbed and kneaded, and got burned, cut and splattered, but where she also slowly learned how to cook. The chef was a huge and nasty widow with hands of gold that turned every piece of food into a piece of art. The princess learned slowly, but after a while got better, until one day even the widow had to grudgingly admit she had nothing more to learn. Still, the once princess remained a humble kitchen help, her arms getting strong and her feet square.

Then one day a huge party of lords and ladies came to the inn, and rented the entire place for three days and three nights. They needed a lot of attention, cleaning services and inordinate amounts of food, but they also paid copiously, so the woman in red served them personally, and ordered nothing was to lack. Both the chef and the princess worked without getting hardly any rest, sending one dish after the other to the board of the rich customers.

One of them, it so turned out, was the very king who conquered the princess’s lands and who since that time hardly ever had a proper meal, for there were still very few cooks in the country, and those few dared not work at the castle, remembering the fate of their predecessors. He was so satisfied with the sustenance at the inn that he offered the woman in red titles and riches if she would release her chef to him. Despite the generous offer, she would not part with the old widow, but said he could have the young help, who in spite of being a homeless thief learned to be a fair cook, and was diligent. The king was satisfied, rewarded the inn keeper, and in three days returned to his kingdom.

The princess now had to work in the same kitchens she ordered closed after she had been unable to prepare her own food. Only this time she knew how to cook, and whatever came out of her kitchen was not only magnificently made, but also seemed to cure the various illnesses of people who ate it. Never before had there been such merriment and good health in the castle, and the king was so pleased he had the cook brought before him. She bowed and waited, and when the king looked into her face, which was not much changed despite her hardships, he instantly recognized the green eyes and the straight noses that he daily observed on nearly all the portraits in the castle he had usurped. Greatly surprised, he asked the cook if she knew her ancestry, thinking perhaps she was a natural child of the previous king, but the princess listed all of her grandsires so correctly there was no mistake she was the proper owner of his kingdom.

In all honesty, he would have her executed on the spot if she had not so greatly indebted him by her cooking, for it is unwise to leave your enemies alive. But as the king had even greater wisdom, he married the princess, and made her his queen. Then she trained all the cooks in the castle, and spent the rest of her days away from the kitchen. 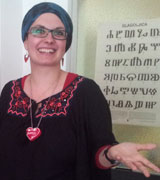 Srebrenka Peregrin is a part-time storyteller and full-time EFL teacher in Zagreb, the capital of the mid-European country of Croatia. She has been writing stories for a quarter of a century, and telling them to her own children, students and story-lovers for nearly a decade. This is her first submission ever. Contact: