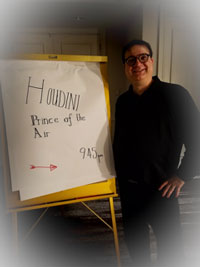 The lights were low. I deliberately waited a full minute and a half after my introduction before entering the stage in true Houdini-style. He would spark their curiosity and leave them wanting more.

Loren Niemi and I traded hawking in the hallway, and soon after, the show began at the National Storytelling Network Fringe event in Kansas City. “The Unfolding Life of Houdini” debuted, and here is the story of that evening.

A room filled with storytellers mixed in with the Kansas City community might be a tough audience for a debut. Untrue. The NSN Fringe is a warm and welcoming community inviting risks within story. I saw friendly, but honest faces. Since the audience was storytellers, they knew the value of story and this made me desire to share my story more. Even though my Scottish accent trailed into Appalachian, they were with me, wanting more. When I secured the old fashioned handcuffs on Diane Cox and she slipped right out, she played along and improvised more of the story.  A storyteller always heightens the narrative.

After the show, there was appreciation. I can’t think of another place where a long line of people simply waited to hug you! I so valued the Kansas City man who said, “Your performance was the one thing I am taking home from this conference, I had to tell you.”

Fringe celebrates risk. After twenty-seven years as a storyteller, this show was unlike any other I have developed. It became a challenge. Starting with a disappearing wand, I merged into a roving reporter, the first allowed in Houdini’s home. As the reporter, I discovered all the allure that is Houdini. In the span of 55 minutes, a picture transformed into an escape with handcuffs and later a séance. We chatted with a spirit who hated Houdini. I channeled Houdini’s father and his wife, both revealing more than they intended. Add to the conversation, a blow hard magician and a quiet evening with Sir Arthur Conan Doyle, author of Sherlock Holmes. All this became a rich multiple narrative performance for the Fringe.   In it, I hope people are challenged to look at stories as through multiple lenses and perhaps share many voices contained in their story.

Unlike a traditional storytelling show, I shared Houdini’s life not in his voice but in the voices of people he knew. The reporter stayed as the transition link between the people. The performance merged improvisation, multiple narratives, and magic. This is not to say it didn’t have other places to grow.

Since the NSN fringe was connected to the conference, there was room to garner feedback. I am indebted to my fellow colleagues and friends who helped shaped the show. Before the show, the kind and careful listener of British (although now living in NH) teller Simon Brooks listened and recorded the show one hour before curtain (There was no curtain.) His advice even at this late hour helped fine tune the work.

After the show, the magic continued. Lilli Pang from Australia shared constructive feedback. At Breakfast, Jim May challenged me to build more of the narrative arc. Bob Reiser took notes and dedicated time to help me build more ideas as well. When asked, people provided ideas, reactions, and other Houdini knowledge. This doesn’t always happen at fringe festivals, but when the audience is peppered with storytellers who are attuned story listeners, magic happens.

As I was leaving, Anne Rutherford shared poignant narrative places to revisit in the work. She praised the direction. I left the festival and conference knowing the magic of community and knowing that Houdini will come again, with a different trick and an even craftier narrative because of the assistants who, when asked, told me the way to make the magic last.

As I boarded the plane, I took a breath and wrote all I had learned. I still have questions about my work. I carefully mapped my development and my new goals. I took my time so I would remember.

When we perform at a conference or a fringe festival, we need to take time to reflect on what we learned. One of my college students Rachel Kerber shared a Latin creed that I am using to guide me, “make haste slowly.” We need to slow down what we know even if we are in a hurry. Take time to learn. We need to slow down to see the world. Let me say, as I take a breath, thank you NSN and my fellow magicians.

Kevin enjoys the wonder and appeal found in taking risks and playing with his stories with others. He believes stories improve when shared with deep listeners. He is the author of “Playing with Stories: story crafting for writers, teachers, and imaginative thinkers” (Parkhurst Brothers, 2014). He is now touring the Houdini show and when he is not doing that, he teaches literacy, story, and education classes as an Assistant Professor at Ohio Northern University. You can find him at www.kevincordi.com