I often assume I know how every story is going to go. Well, I have been around awhile and I watch the news; different settings, different characters, the same tragic story over and over and over. But sometimes, somehow stories still surprise me.

One spring afternoon, not long ago, my daughter and I were having a snack while we waited for her bus. We were at a delightful little Dominican restaurant facing the King Street bus station in downtown. Charming place—bouncy Dominican music, turquoise and fuchsia walls, photos of palm trees and beaches, and delicious food—it all made us smile. We were on wooden barstools facing the large, bright, window framing a sweet turquoise painted patio. 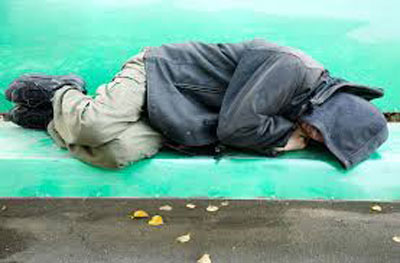 We were relaxed and happy, enjoying our chatting as we snacked and watched the busy flow of humans on a busy, busy street. People rushing this way and that way… Now there were some people who didn’t fit the flow. Those of the fringes. Some with far too many bags, some with no bags at all, some holding signs or just their cupped hands, some meandering with no apparent purpose, some huddled and still with no purpose at all. I tried not to see those of the fringes, but they were there.

I think I am fairly open-minded, but I am also white middle-aged woman raised in the suburbs where everyone had a house, a yard and a car, and nobody slept in doorways. So when I am faced with these fringe people in my path I often feel churned up with guilt, sadness, frustration, fear, sickness, anger, remorse and sometimes charity all jumbling inside me. All this causes inaction and avoidance mostly and I look down, rehearse my story of who these lost ones are and I continue on my way.

A woman separated herself from the human flow on King Street, and turned into the bright patio. She was rough–not just around the edges, her layers of clothing all about the same dirty color, wild hair, and even wilder eyes. She stepped toward a couple at a table, they looked down and she moved toward the restaurant door. There was no escaping or avoiding this situation. I couldn’t look away as she moved toward us, and as the familiar flow of emotions coursed through me I wrote the woman’s story in my head as I watched her move toward us. It was the same stories we read over and over; all tragic, all loss, and all bad endings.

We were inches from the door, and she looked right at us as she grabbed the door handle. There was dark despair in her eyes and I was afraid.

That look said, “I will not be invisible.”

We looked down as she came in.

She began yelling, “I need fifty cents or a dollar, I gotta take the bus.” We shrunk and looked away, and she turned toward the server at the counter, her voice louder, “If I don’t get the money I’m gonna jump in front of the bus, and then whatcha gonna do?”

The young man turned and hurried toward the kitchen. There was no one else, so she turned back loudly muttering toward the door. She faced us again, and my daughter was inches from her, putting up her hand to stop or block the woman somehow.

Her dark eyes said this woman was tired of being rejected, of being invisible, of being someone else’s story. Her face darkened. Today she would not be ignored. She threw the door open, stomped outside and continued her tirade outside, flipping over patio tables, kicking down chairs.

I pulled out my phone thinking, should I call 911? But I know how those stories go too; fear, anger, danger and violence. I put my phone away. A few young men came running from the back kitchens, alerted to the situation. I saw the look of firm determination on the first young man’s face and my fear took a new turn, and this story’s ending wasn’t any better.

These are the stories we hear and see day after day and we come to believe hopelessly that there is no other storyline, no other ending.

I had been yanked into this, there was no back door, and she was feet away from the restaurant door, throwing chairs and yelling, while the young men were hurrying down the hall toward us. We sat, frozen, breathless, time slowing down.

Another young man came rushing from the kitchens, catching up with the others.

“Wait! Wait!” his voice was calm and strong as he pushed through the others toward the door. “I got this.” I stared at his face calm in the storm, and felt hope like a small bird at the bottom of Pandora’s box weakly flap its wings.

Maybe I didn’t know the ending of this story. Maybe…

He wiped his hands on his dirty apron, shrugged his tattooed shoulders, smoothed his beard, and stepped out into the storm. He moved toward her, not too close, just a few feet from the door. We watched silently through our large window which now framed this story like a movie screen.

He began to speak to her; and we could hear nothing; it was a live silent movie as we watched his lips move. We were mesmerized by his calm face and body; I held my breath as he continued to speak.

He held out open hands to her, beckoning. He lifted his palms together at heart height, continuing to speak. He dropped his hands open again. The woman slowed her actions, drawn by his calm. We all watched him now, curious. Hope’s small heart continued to beat, and I was motionless, not wanting to distract anyone from this drama unfolding. Again, he focused on her face, put his palms to heart, then open. Palms open, palms to heart, palms dropping open again. I lost count of his meditative motions.

The woman’s face slowly melted to softness and she stepped toward him, her eyes on his— wide like a deer. He gently beckoned again, and the woman slowly moved toward him. Now the two of them were framed in our window, both faces soft, and he took her hands in his.

He opened his eyes and slowly led her toward the bus stop on the street. She walked with him, still holding his hands. We watched them walk away quickly being swallowed by the crowds.

I strained to watch them—I saw he was talking, she was listening. Maybe he reached into his pocket, maybe not, all I saw was her throw her arms around him, and he patted her gently. She disappeared in the flow, and he turned slowly walking back toward the patio. He turned up tables, straightened chairs and we began to breathe. The story now was completely on its end; this was nothing like I see in the news and I was caught, mind blank, still holding my breath.

Holding this story; this new story.

My daughter rushed out to help him, and I witnessed her eyes gleaming as she spoke to him. He looked embarrassed, but a smile grew on his face. I watched as she talked and he listened. He talked and she listened. This young woman has suffered too, with drug addiction, homelessness and hopelessness, and now she was the one to listen and to witness, and to keep the story.

My eyes filled as I watched my daughter hug the young man, and they righted the patio.

Smiling, she hurried back to me, and climbing on a stool, she said beaming, “Oh Mom, he’s been homeless too!”

This had not been the story I thought it would be. It was a new story, but also the oldest story, spun with love. A new ending and maybe for me, and for others who witnessed– a new beginning.

I am not an island. I am inextricably woven into the human fabric with my seven billion brothers and sisters and I choose love that spirals in interesting ways.

I can choose to be part of this best kind of story. Palms open, palms closed, heart center.