Most kids are teens before their parents sit them down, usually just before the first date, for that awkward talk about the unfortunate consequences of the careless exchange of body fluids. I had that talk with my kids before the first playdate. I told my kids it’s nice to share. But not everything. My daughter Bea suffered from asthma. Every cold she caught seemed to turn into a raging case of pneumonia. Since pre-school, I drummed it into their little heads, “Do not drink from someone else’s cup. Let no one drink from yours.” And when traveling,“Don’t go near the water. Do not drink it. And don’t even think of rinsing your toothbrush in it.” 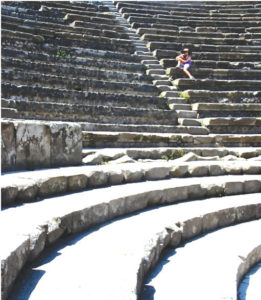 When the kids were eight and twelve, we went to Italy. We took “When in Rome…” to heart. We had gelato every day. There were so many flavors we’d never even heard of. Cantaloupe, prickly pear, honeydew melon, chestnut, and pink grapefruit. We vowed never to repeat a flavor, and managed to keep that promise without ever having to order the neon blue Viagra gelato–we decided to save that one for our second honeymoon. And wherever we went, Eli kept track of our daily stair count in his journal. We climbed lots of stairs, from The Spanish Steps and the dome of St. Peter’s to all those narrow stone stairs in charming little hilltop towns clinging to slopes too steep for roads. It was the Italian version of a Stairmaster, and we used it to offset the gelato.

After seeing Pompeii, we had a long train ride from Naples all the way up to La Spezia. When we boarded, we were delighted to discover we had a compartment all to ourselves. It was a welcome time-out from the summer heat and the crowds of tourists, the perfect vacation from our vacation. The kids sketched and I knitted, while Thom read to us from Donata, Daughter of Venice, picking up the story where we’d left off the night before. At the station in Rome, there was the bustle of passengers hurrying to get off, or board and find a seat. A few faces peeked into our compartment from the corridor, but it looked like someone’s suitcase had exploded in there, and they kept going. The train started moving.

“Dodged that bullet!” we thought.

Then the door to our compartment slid open. A middle-aged man stepped in.

His wife squeezed in after him, and nodded a silent greeting. We quickly cleared off the two remaining seats and scooted over to make room for them. Also their groceries, suitcases, duffle bag, and the two-liter bottle of water the man was carrying. As they stowed their stuff overhead and under the seat, Thom tucked away our book, and I pulled out my travel journal. 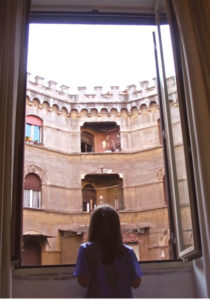 “Grazie,” said the man, settling into his seat.

I introduced Thom and the kids, and we exchanged pleasantries. His English was good, but there was something about it…

“Excuse me, but is that an Australian-Italian accent? Are you from Australia?”

Giorgio was indeed from Down Under, but with roots that went all the way back to Italy. He told us he was just a boy when he’d moved to Australia with his family. Their daughter was born in Australia, but had returned to the Old Country to study in Pisa. She’d met someone, and now Giorgio and Leah were finally coming home to attend her wedding to a nice Italian boy.

Giorgio was curious about our home. He had never heard of Seattle. In his mind, the US consisted of New York City and Alaska, with nothing worth mentioning in between. I told him my sister was from Alaska, and he asked about the strange American creature called ‘moose.’ When Eli sketched a moose for him, Giorgio was surprised. He’d always pictured a moose as a bear-like creature with pointy horns, and we all had a good laugh.

Then Giorgio kindly offered us a drink of water from his plastic bottle of questionable origin. Of course, I politely refused.

“Please. It’s from the village where I was born. It tastes as sweet as I remember.”

Before I could refuse again Giorgio filled six little paper cups, one for each of us. I accepted the cup, wishing there was a potted plant into which I could discreetly pour my little helping of hospitality. But he and Leah were watching. My children were too, cups in hand, waiting to take their cue from the Queen Mum of The Land of Do Not Share.

In Robert Heinlein’s sci-fi novel, Stranger in a Strange Land, ‘grok’ is the Martian word for “to drink.” But metaphorically it means “to be one with.” On Mars, the merging of bodies with water symbolizes two entities, combining to create a New Reality. That sums it up pretty well, and in this completely New Reality, this parallel world, this unscripted blooper, I lifted the cup to my lips. In spite of all I knew and espoused about germs, cold sores, and contagion, I took a sip. Who was this stranger, my children wondered, staring at me as if I was an alien creature from…well, Mars. Ignoring the smarty-pants expression on my husband’s face, I sipped again, and toasted the New World Order.

The water seemed unexceptional to me, but Giorgio’s smile was definitely contagious, and one little sip opened the floodgates to an outpouring of much more than water. As the train rattled along, Giorgio told us everything we must do while in this golden land. We couldn’t possibly leave Italy without learning to make proper tomato or garlic sauce.

“Brown, but don’t burn the garlic.”

Step by step, he dictated his family recipes. Leah nodded in silent agreement, and I wrote it all down in my journal. Canneloni, parmigiana eggplant, chicken breast filet.

“It’s not difficult!” he said.

We passed a field of sunflowers, bright, cheerful, stretching out as far as the eye could see. Giorgio’s eyes filled. “It’s beautiful!”

It was an expression I heard him repeat many times, as we passed the terraced vineyards, tidy olive groves, and little red-roofed villages.

I peeled a couple of oranges and passed out segments to everyone—they gladly shared our offering as well.

“You must miss Italy. Why did your parents leave?” I asked.

In his Italian-Australian English, Giorgio told me a story. He spoke of his family’s decision to escape the pain and poverty of post-war Italy. I had no idea Italians were the third largest minority in Australia. Like the Irish, who came to America to build the railroads, Italians provided cheap labor in a rapidly developing country. But…just as the Irish were confronted with “No Irish Need Apply,” the Italians were told, “If you don’t like it, go back to Italy.”

Giorgio said that when he was a teenager, all he wanted was to fit in. Money was tight, but his father understood his need to walk proudly. For Giorgio’s high school graduation, his father bought him handsome new cream-colored shoes and matching trousers. Giorgio couldn’t wait for graduation. He put on his new shoes and trousers, and walked with his brother down the main street, where Giorgio could admire his reflection in the shop windows, and then past the park to parade before the girls chatting on park benches. At first it was just a couple of boys who started following.

As their numbers increased, the gang grew bolder. “They kicked dirt on us, and my new shoes. We went home, my brother and I, and in back of my house, I took my knife and I cut those shoes. I cut them to pieces and threw them away.”

Giorgio’s father was furious. He’d left behind everything he knew and loved, to collect trash for a living, in order to give his children a better life. After scrimping and scraping to buy those shoes for the first one in the family to earn a high school diploma, he couldn’t understand why Giorgio would toss them into the trash.

But Leah understood. Those shoes were a target on his back, an invitation to mock him.

“They teased Leah in school for speaking with an accent, and it wasn’t just the children,” Giorgio told us. “If she fell on the playground at school and cried, no matter she was a little girl bleeding, her teacher called her ‘hysterical Italian.’”

No wonder she had learned not to speak English with strangers.

In time, Giorgio said, Australians acknowledged Italians as hard workers, and recognized the contribution they’d made to the country, much as we now celebrate Irish-Americans, especially on St. Patrick’s Day. But it had been a long hard journey. I thought of my grandparents, fleeing pogroms in Russia to seek asylum in America, not knowing a word of English. And the Irish, forced by the Great Famine to emigrate or starve. Now two million Syrians have fled civil war and violence with no more than the clothes on their backs. Each one with a story to break your heart.

When the train pulled into Pisa, we felt we were saying goodbye to friends. Giorgio kissed us on both cheeks. We wished their daughter health and happiness. Taking my hand, Leah said, “Thank you” and “goodbye” in perfect Italian-Australian English. We had the compartment to ourselves once again, but didn’t resume our read-aloud novel. Books are wonderful, but we wanted to discuss the stories we had been privileged to share. Out in the world, whether in Italy or just down the block from home, a story might drop uninvited into your lap. We decided to be as open to each one as to a new flavor of gelato. Of course, Thom and the kids still teased me about sharing a cup with total strangers. But you’ll never know what you’re missing if you’re not willing to share a compartment on a train, accept a drink of water from a stranger’s cup, and walk a mile in another man’s shoes. 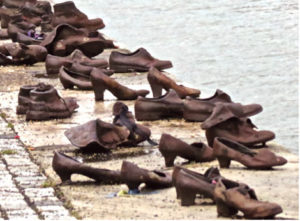 All photos by Naomi Baltuck ©

Naomi Baltuck is a writer and storyteller from Seattle, WA. She is the author of Apples From Heaven:Multicultural Folk Tales About Stories and Storytellers, and the travel/storytelling blog, Writing Between the Lines and is on the core staff of The BeZine, fostering proximity and understanding through our shared love of the arts and humanities and all things spirited.