The Heights (The Independent Student Newspaper at Boston College),    December 22, 2018

Massmouth is a nonprofit organization that aims to give people in the Commonwealth of Massachusetts a place to tell and hear stories. Their story slams, which are always based on a certain theme, are competitions in which 10 people are given the chance to tell their story, without any sort of aid, for five minutes or less. After everyone has had a chance to compete, the five judges—whose identities are undisclosed—vote on who told the best tale.

This evening, the slam was upstairs at the Trident Bookstore. The topic was Black Sheep.

Mika Gross told a story about how she and two others were ostracized in their cabin at summer camp and thus escaped getting the lice which infested the heads of their 10 tormentors.

On a less lighthearted note, Daniel Goodwin shared his story about the unexpected death of a man he had loved and who had been his friend. 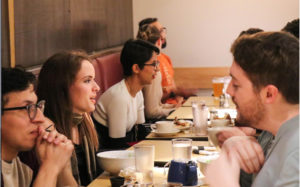 Telling stories like these is a fast way to get to know a person—it seemed that everyone in the room knew more people than just the ones they arrived with. Theresa Okokon, host for this evening, said it might sound like a cliché, but Massmouth really is a community.