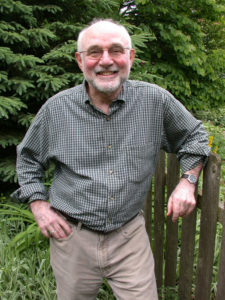 A good interview begins with making your interviewee comfortable. Let him pick the place where the interview will take place and where he wants to sit.  Some people feel nervous about being interviewed.  If so, have your interviewee do an activity, such as cooking.  Not looking at you helps relieve some people’s fears.

Tape recorders may make people uneasy. Usually, I put down my recorder and test it right in front of the interviewee.  Some people dislike how they sound, but I remind them that no one but me will ever hear the tape.  I also tell them that they’re bound to say something during the interview that is so beautiful or important I will want to quote it exactly as they said it. Once I begin the interview, I put the tape recorder out of the line-of-sight. It’s there but it’s not there. I use the recording as a back-up because I always take notes on the conversation.

An interview focuses on the interviewee, but it is actually a conversation between two people.   So you have to be involved. The interviewee must know that you really care about what he is saying. That means responding.

Remember that listening involves your whole body. There are so many physical things that people do naturally when they are listening: nodding, smiling, leaning toward the person, laughing.  Also, there are so many verbal cues that make people want to talk more: “really?” “You’re kidding?” “That’s amazing!” But never fake such a response.  Simply do what you naturally do when you have a conversation with a friend.

None of this advice is important if you don’t ask the right questions. I do that by following my interests and asking only about things I want to know more about. I also follow the teller’s interest. If you’re really listening, it’s easy to tell when someone cares about what she is saying.  It’s in her voice, her face (especially the eyes), and her body.  When someone is excited about telling you something, there’s usually a reason.  Go with that excitement and explore it. It will take you down unexpected and exciting paths. If you need certain facts, you can ask questions at the end of the interview or schedule a follow-up meeting.

The key to a good interview is being thoughtful and real. I often end workshops on this subject by saying, Be human. If you do that, your interviewee can be real and human, too, and you can make the meaningful connection you’re hoping for.

Syd Lieberman tells poignant and hilarious personal stories, identifies with Sean Connery, and navigates the mad world of Edgar Allan Poe as easily as he wanders the foolish streets of Chelm. He also writes and performs original historical pieces. Syd has been commissioned by NASA, the Smithsonian Institution; Johnstown, Pennsylvania; Historic Philadelphia; and the Van Andel Museum Center. His work has garnered awards from ALA, Parent’s Choice, and Storytelling World.  He has performed for the Brookings Institute and the United States Holocaust Museum, and has taught storytelling at the Kennedy Center and Disney World. Syd is a member of the Storytelling Circle of Excellence.