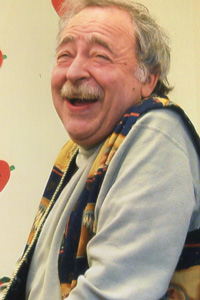 Me? Tell a funny story in public?! I could die out there!!!” That’s what folks say. Whether you call yourself humorist, raconteur or comic storyteller you may die many times – This is your chance to learn to live like a cat.

I died in nineteen eighty. My friends and I were about to get our big break – a high-class showcase for a comedy show we’d been touring! 130 journalists, booking agents, potential investors filled a drafty club in lower Manhattan.

The lights went down. The audience laughed. They clapped. They were ours…. Then it happened! The laughs faded to giggles, then to whimpers, then to silence. We looked up. The audience seemed puzzled. So, we went faster. Now they looked confused. We began to shout. Now they looked like a scene from The Producers – Their faces frozen in a rictus of horror!

Then, a terrible sound: the scraping of chairs. They were walking out.

I wanted to jump up and down and cry; I wanted to stage a full-blown temper tantrum. But, there is no crying in comedy. The audience’s exit had become The Exodus, and we still had three quarters of the show to do.

Finally, the house lights rose on an audience of eleven – my wife, bless her, my aunt, and a few stony-faced friends.

It was official — We had just died.

A week later we met and tried to figure out what had gone wrong. Comedy was a blood sport. Time to learn the rules. Here are a few that we figured out:

If you want to keep the audience with you, take it easy! When we saw that we were dying, we did the normal human thing – we ran like hell! Wrong! When you lose the audience, slow down. Give folks time to catch up with you. Don’t get louder; get softer. Show them that you are relaxed, and they will relax, too.

Mix up your moves. You are a dancer, not a pile-driver. Use the laughs to accent the story, to give it rhythm. Keep the audience attentive to your every word – just where you want them to be.

Rule Three: Use your head, and not just to butt your opponent.

Learn the high points and the low points, the sweet parts the funny parts of your tale. A story is like a roller coaster – you need that long, clanking, chug chug chug up the hill so you can get to the wild shrieking whoop that follow, and after the climax, let your audience slow down and come to rest.

Rule Four: Be a lover, not a fighter.

As every teenage boy finds out, when you grab a girl, all you will get is a concussion. Likewise, no audience wants to be grabbed. They need to get to know you first. Bill Cosby begins his routine just sitting on the stage, smiling at the people. When they have quieted down, he begins to chat – like a favorite uncle. Soon he is on his feet, and his rubber face springs to life, and before you know it you are you are caught in the story’s web. Watch master-storytellers like Laura Simms and Donald Davis at work. You never see them coming,

Your way of telling is yours! Do it with all your heart! If you are loud and raucous, go for it! If you are quiet and intense, do that. Don’t apologize. Good comic storytelling is never having to say you are sorry. Remember the motto of the Undershafts, the munitions-makers in Shaw’s Major Barbara: “Unashamed!” A storyteller is Unashamed!!

OK, Rocky, you are almost ready. You probably know much of this. But going out there and risking a well-timed spit-take takes guts and practice. Come to “Bellylaughs and Beyond” at the 2015 National Storytelling Conference in Kansas City, MO (July 30-Aug 2). What can you lose? Bring a favorite funny story with you – Especially one you’ve never told on stage. The world deserves to hear it!

Bob Reiser’s enthusiastic storytelling style was shaped by a misspent youth rooting for the Brooklyn Dodgers, performing with Second City and doing street theater. With six books under his belt, including the award-winning Everybody Says Freedom, written with Pete Seeger, he finally calls himself a published author.

Next year he expects to unveil his new book, Story Fever, about the art and madness of a life in storytelling.

He tells and teaches from his base in Western Massachusetts. Contact him at www.bobtales.com or write via .