Cassie is a Next Generation Scholarship recipient for attending the 2013 National Storytelling Conference, August 1-4 in Richmond, VA. 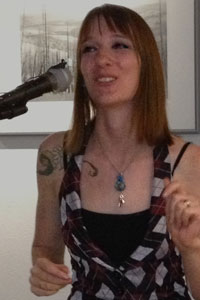 My storytelling teachers and mentors told me that sometimes a synergy between the teller, the tale and the audience can emerge in an almost tangible relationship—an unseen but nonetheless palpable energy becomes present as these three variables meet in a single moment. They said that if I care for the story in my research and crafting, the story, in turn, would carry me in the telling.

Soon after hearing this, I created a show combining my two loves: traditional storytelling and good coffee. As I told the same stories at four different venues, to four very different audiences, I learned the truth of a lot of what my teachers and mentors had been telling me.

The second show was, from my perspective, the best of the bunch. As I regaled the audience with over an hour of gruesome and grizzly tales, suitable for a dark October evening, I was flying high! Telling these stories exhilarated me while the audience, engaged and transported, redoubled my passion. Teig O’Kane labored under the weight of his corpse; the youngest daughter’s anger and desperation, fueled by blood and loss of innocence, rescued herself and her sisters from the ogre in the hills. Yes, this was storytelling! There was life in this! Every image was clear, to me and to the attentive audience, excitement glittering in their eyes. Whether that was synergy or the stories carrying me, I was on fire and gushing thanks at the appreciations I received at the end of the night.

A week later, my third performance contrasted starkly. Usually, my opening story about ruining my mother-in-law’s pans and stovetop the first time I roasted coffee, would evoke some laughs. This audience looked at me blankly. I had to keep going, but now, even to me, the words were sounding empty. Continuing into the third story and searching the audience for any reaction, I wondered, “Was last week’s success just a weird anomaly?” Midway through the second half, loud music came through the walls from a neighboring bar, and I wasn’t sure if Tieg O’Kane would be able to bury his corpse that night. Words continued to tumble out of my mouth and gestures happened as I ticked off the stories. I was exhausted by the end of it and ready to give up storytelling altogether.

Later, friends and colleagues reassured me that, while it did not have the same energy as the previous show, it was still good. I learned that even though the audience felt subdued, they were having a good time. I, however, hadn’t been able to see it. Watching a video of the evening revealed how my heightened insecurity had led me to rush the stories.  A deep breath could have restored a steady pace and alleviated my anxiety.

With those four October shows, I came to a deeper understanding of the notion of synergy as I experienced the dramatic difference that an audience can have on a teller. On that third night, I wasn’t present in the stories or for my audience, but I knew the stories and I loved them. They carried me. Other nights, we soared together discovering new highs of relational happiness, reminding me how seemingly simple stories can transport teller and listener alike.

Cassie, owner of Kaleidoscope Coffee, has loved coffee for 10 years.  She recently discovered that storytelling is pretty cool too, especially the traditional kind. She is working towards opening a storytelling coffee shop.