He said a clumsy fall
down the dorm stairs
kicked him off the tennis team
and onto the school newspaper
making a broken bone
the reason why
he’s standing at the podium tonight
sharing stories from a career
he literally stumbled upon.

Close to sixty now, his bile
over Ivy League rejections
a promised job withdrawn,
even a diamond ring refused
has long since vanished with his hair.
He credits each broken bone
as one step closer to the audience
applauding him tonight.
I rise on my crutches
and blue boot cast
with new hope of healing, too. 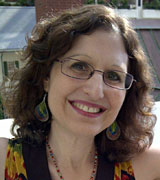 Jacqueline Jules is a former librarian who told stories to her elementary school classes. Some of those stories are now picture books. She is the author of 35 books for young readers including Feathers for Peacock, Never Say a Mean Word Again, the Zapato Power series, and the Sofia Martinez series. Also a poet, her work has appeared in 120 publications, including two poetry books, Stronger Than Cleopatra (ELJ Publications) and Field Trip to the Museum (Finishing Line Press.) www.jacquelinejules.com