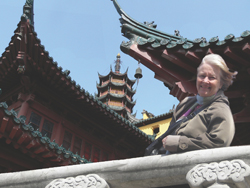 My Master’s Thesis in History was on Professional Chinese Teahouse Telling and I presented samples of these styles at the NSN conference in Cincinnati. Professional storytelling was passed on orally from master to apprentice for generations, for there was no respect for those who were not taught for a number of years by a recognized master.

Styles and stories vary from region to region in China, and often the poetry, songs and humor cannot be translated from one dialect to another. Unique skills and variations of tales are often identified with a particular region. Storytelling is often accompanied by instruments such as drums and gongs or the banjo-like sanxien and pipa lutes. Some styles are acted and sung as operas. Puppeteers and dancers also perform these popular stories. Performers work alone or with one, two or more tellers, all taking parts as well as narrating.

Storytelling in public venues likely came to China with Buddhist monks who attracted crowds and spread their beliefs through storytelling on the streets. It rapidly became a secular skill as well, and was used by peddlers and other street performers who were generally illiterate. Their innovative skills inspired the literate upper class to adapt these oral tales into printed short story collections and novelettes. The written versions became well known even to the illiterate, and the newer versions were retold by storytellers. A century later the tale might have been so improved by oral tellers, a new novel was published. So grew the long, complex storytelling tradition which eventually came indoors from the market, to be told in teahouses and storytelling halls.

The custom of gathering in the teahouse for two hours a day to listen to a beloved 30 – 60 hour story came to a serious halt with the Cultural Revolution, c. 1966 – 77. Any story containing superstition, religion, sex, rebellion, foreigners or upper class heroes was forbidden. Tellers were forced into other trades or placed under arrest. Masters were not able to pass on the tradition and an entire generation of storytelling was limited to eight traditional stories accepted by the government.

When respect for ancient Chinese heritage was restored, there was a short but strong renaissance in the storytelling world. Storytelling halls were rebuilt and the teahouse telling tradition returned. Schools were established to pass on all of the arts, and many masters were, and still are, employed as teachers. The students receive a rounded education of math and history and literature, as well as learning their art. In the 1990s, China began its transition to the modern world and storytelling had serious competition from media, as has occurred all over the world. You can still find a teahouse and sit listening, sipping tea and munching on peanuts with the elders, but it is increasingly hard to find. Few of the younger generation have experienced this art, fewer are able to make a living at storytelling. If you want sources for some fascinating, complex stories, email me.

Cathryn Fairlee travels the world researching, listening, teaching and telling. She has a Master’s Degree in History and speaks Mandarin and Spanish and a little English. In addition to Chinese Tales, another fascination is performing epics such as the Maya Popol Vuh and the Hindu Mahabharata. Cathryn teaches a workshop on Chinese Professional Storytelling and another on Telling the Long Stories. She sponsors a biannual epic workshop in the bay area. Her favorite venue is the house concerts in her northern California home.