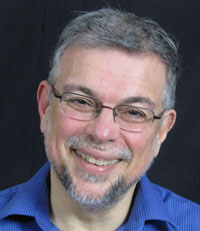 In January, 2013, I had a problem. My week as Teller-in-Residence at the International Storytelling Center was coming up soon, and the stories I wanted to tell there – an hour of stories about my parents – didn’t yet exist! How would I create and polish them in so short a time?

Always the optimist, I began talking to my principal storytelling coaching buddy, Jay O’Callahan, about what I wanted to communicate about my mother and father.

“Even though they’ve both been dead for years, their influence remains in everything I do,” I found myself saying. “For example, I was coming home last week in the snow. I saw how beautiful our front door looked, decorated with the snow-crowned Christmas wreath my wife Pam had chosen. Then I saw the Jewish mezuzah next to the wreath, on the doorpost; it had a crown of snow, too.” (A mezuzah, by the way, is a container for a small scroll from Deuteronomy, placed on the doorpost of many Jewish homes.)

“Suddenly, I saw the house I grew up in, near Chicago. Even though my father was Jewish, we always had a Christmas tree in one window – but this year my Christian mother had bought a tacky electric menorah and put it in the other front window. I never understood why she thought we should have a menorah. We never celebrated Hanukah.”

I paused a moment, as I remembered something. “You know,” I said, “the snow-covered mezuzah I noticed last week was a gift from my Christian minister wife. It was a significant gift, because it said to everyone who came to our house—including the members of her church—’A Jew lives here.'”

Suddenly, my eyes filled with tears. I told Jay, “I just got it! My mother couldn’t articulate it, but her menorah said, ‘A Jew lives here.’ What a thoughtful gesture toward my father—and I never understood it until now.'”

Jay made some very appreciative comments, then asked me to tell him more. I told him some of my unformed memories about growing up with one Jewish and one Christian parent. Before I knew it, my mind was combining those early memories with the moment of noticing the snow-covered wreath and mezuzah. In less than a week, I had a solid draft of a new half-hour story, “My Mother and the Menorah.”

Two weeks later, I began brainstorming more memories with Jay, including the time I convinced my 91-year-old father to have a biopsy, after his chest x-ray had shown what was almost certainly cancer. After Jay gave me some appreciations, I told him a new thought: “You know, the techniques I used, to get my Dad to stop being so anxious, were really techniques I had learned from him as a boy!”

Within minutes, I had outlined a new story composed of an episode about how my Dad had taught me when I was a child, the episode about the lung cancer, and additional episodes required to get from the childhood key moment to the adult key moment.

Soon, I found myself creating story after story from memories that had just been “things that happened” and were now becoming the core of some very meaningful and entertaining stories. I ended up with two and a half hours of material – and ideas for a half-dozen more stories that I didn’t have time to develop!

What Had I Discovered?

Although the stories came quickly, the understanding about my newly discovered story-creation technique came slowly. In the fall of 2013, when I was deciding what workshop to propose for the 2014 National Storytelling Conference in Phoenix, AZ, I asked myself, “Is there something new I can teach, based on how I created all those stories so quickly?”

After some thought, an image came to me: those raw memories (e.g., of my mother and the menorah and of my father and his biopsy) were a lot like clouds: shapeless yet filled with emotional charge. There was emotional energy in them for me, but that energy was static, unable to flow from the cloud to a listener.

Once I found that second episode, though (e.g., the moment of seeing the wreath and mezuzah in the snow, or the way my Dad had taught me to listen and praise) the energy began to flow. The second episode became like a lightning rod, conducting the emotional energy, focusing the story’s meaning, and producing a clear story line.

I’ve come to call this approach to creating personal stories “From Clouds to Lightning.” I’d be interested to know if anyone else has come up with a similar approach.

Storytelling coach Doug Lipman is the creator of the acclaimed Storytelling Workshop in a Box – the one-of-a-kind, 37-lesson, comprehensive, audio-plus-print storytelling workshop that comes to you. Doug also offers free articles and other resources, listed at www.storydynamics.com/lists, to help you become a transformative artist and integrate storytelling into your work life – including how to market your teller by creating a supportive community around you. His monthly “eTips from the Storytelling Coach” has subscribers in over 60 countries. Don’t miss working with Doug live at the 2014 National Storytelling Conference, July 24-27, Phoenix/Mesa, AZ