He had crossed the line… one too many times, leaving me battered in both body and soul. So I called my friend Reen, who was planning a trip out west and asked, “Can I come with you?” And alleluia, she said, “Yes!” Reen had just ended a relationship. She understood. So I packed up my life and we left Chicago in our dust. When we dropped off my belongings at my parent’s home in Colorado, I discovered that after months of abuse, I could barely stand to be hugged hello – even by those I loved. My body would jerk away if my family even touched me suddenly. And I did not want to talk about it! So it was with relief that we set off again, our 20 years old, achy- breaky hearts in tow, Thelma and Louise before our time. We played John Denver singing Rocky Mountain High on the cassette player as we zoomed along in Reen’s new ‘74 Hornet wagon. We were gonna break out of boundaries ‘cause we were headed to… Canada!

We approached the border cautiously. After years of draft dodgers flowing into Canada, we had heard the border guards could be touchy. So, sporting braided hair, crucifixes around our necks and Seventeen magazines spread across the back seat for extra wholesomeness, we coasted up to the border guardhouse. He just smiled and waived us on through.

After driving all day and into the night, we finally pulled over to sleep, only to find at dawn that we had parked directly under the giant carved wooden sign for Jasper National Park. We had arrived! Our first adventure was riding a tram 7,500 feet up to the top of Whistler Mountain. I blew bubbles across the 360 degree awesome panorama of multiple vast mountain ranges – I felt lighter up there, an element of a world that stretched beyond my reckoning. Something that had been tightly coiled within me began to unwind…

People hiking up the mountain told us they saw a wolf, a moose, and ptarmigans… so we decided to hike down rather than take the tram, BUT the only wild life we encountered was giant mosquitoes so big you did not have to squint to see their body parts! They drove us mercilessly down that mountain. We returned to our campsite exhausted but determined to sleep under the stars that night, so we dug out a spot and lined it with rocks and built a little fire. We laid out our sleeping bags on two sides of our little campfire and wondered at the stars above as we began to slip off to sleep… until someone started shouting. “That is an illegal fire!”

I twisted in my mummy bag, my arms trapped inside, to see a person dressed as a ranger, but he was only 4 feet tall… and hopping mad! “You have built a fire in an unauthorized area! Fires are only allowed in the metal grate on the cement pad by the picnic table! I will fine you $107.00 if there are ANY signs of a fire being there in the morning!”

In my half-asleep state, I had a hard time grasping the reality of the moment. Was I dreaming of a Yogi Bear cartoon or was this real? I woke up a bit more when Mr.Ranger started pumping on a tube strapped to his leg and then spraying water from the attached hose all over the fire, splashing wet soot on our bags. “Hey, watch it!” I rasped, hoarse from the wood smoke. He ranted at us awhile longer and then disappeared into the night.

So, groaning, we snuggled back down into our bags and once again slipped off to sleep until… in the middle of the night… I was awakened by something heavy sitting on my feet. In the moonlight I could barely make out the shape of a bear. I peered across the soggy fire pit. A bear was sitting on Reen too. The wildlife had found us. I whispered, “Reen!”

“Yes!” she whispered back to let me know she was awake. And then the bears started moving (my heart leapt into my throat) … but they were moving towards the picnic table. Reen added quickly, still hushed, “Should we run for the car?”

“I’ll never make it out of this bag,” I answered. We were so tired from our search for wildlife, that as we lay there listening for the sound of the bears (leaving or returning?) we fell back asleep! The next day, we awoke to find damp, sooty bear tracks all over our sleeping bags, picnic table and campsite. As we left the campground, we told the local ranger.

“You could have been seriously hurt!” she said told us. “Maybe even killed!”
“How often do the bears come through here at night?” I asked.
“Oh, nearly every night,” she replied.
“Then why don’t you put up signs to warn people?” I asked.

“We don’t think that looks nice,” she explained. “But we have these pamphlets.” She handed me a booklet illustrating what bear tracks look like and how to hang up your food, etc. – but nowhere did it say that bears take a nightly stroll through the campground. I finally calmed down after soaking in the hot springs – especially when a herd of big horned sheep began nibbling grass at the edge of the pool. But you can bet we slept in the back of the station wagon after that.

We hiked up to waterfalls, kayaked the river and drove on. Heading down the Ice Fields Parkway, we discovered a spectacular mountain around every bend, glaciers flowing over their shoulders all the way to the road. We arrived at Banff and wandered through town, savoring the galleries and devouring bookstores, until we stumbled upon a chamber orchestra was practicing on one lawn, ballet dancers on another. Jazz music poured out of a nearby window as I read the poster of the upcoming film festival and peered in at the vibrant paintings inside the student gallery. Impossible mountains loomed overhead. I had drifted onto the campus of the Banff Centre for Fine Arts. It was my own corner of heaven and I wanted to move right in.

And then a young woman approached me from the street. “Hey, are you an American?”

How could she tell? I was just standing there and had not even opened my mouth and was not wearing any logos. “Does it show?” I asked.

She just shrugged and persevered, “Well, are you?”

I nodded, wondering what I was getting myself into…

She seemed vindicated. “Did you know that your President Nixon resigned?” I must have looked skeptical because she waved me over to the newspaper stand. “Here – look!”

Sure enough the headlines read: “Nixon Resigns – President Calls For Time Of Healing.”

I was stunned… and having trouble wrapping my head around those two phrases put together. I thanked my messenger and ran to find Reen to share the news.

On previous nights in the campgrounds people retired early with only a few quietly talking while hugging their campfires but that night – the entire campground was celebrating! Crowds of people gathered around bon fires playing guitars, flutes, drums and harmonicas, singing with intermittent whoops of glee! Reen and I travelled from campfire to campfire through the night, meeting people from all over the world. And I repeatedly expressed my surprise that everyone from afar knew so much about politics in the U.S. So people started asking me what I knew about Nixon…

“Well,” I said… “I remember him campaigning he was going to end the war…”

Someone with a Swedish accent spoke, “But what he did was move the war from the ground to the air!” I turned to see both of the couple from Sweden nodding their heads – not sure which of them had spoken.

An Australian gentleman added, “So Nixon bombed Laos, Cambodia and Vietnam to bits. Some say he killed fifty thousand but I think it’s more like three times that number!” Heads nodded around the fire.

I dredged up what else I knew. “Students were angry that he took so long to end the draft… so many more draft dodgers ended up here in Canada.”

“More the pity for the U.S.,” said a Canadian woman with an Irish accent. “We’ve got some of your best and brightest up here now.” This was a different take on draft dodgers from my Midwestern neighbors back home.

The conversations continued on into the night as we celebrated what everyone kept telling me was a step toward justice… and peace. As others joined the campfire, some placed their hands on my shoulder in greeting as they joined the circle. Others gave me impromptu hugs when I told them where I was from. And I suddenly realized, hours into the night, that I was no longer flinching at being touched. The pain and fear that had been jammed inside me had slowly been unraveling and drifting loose over our journey. Being joyfully welcomed and hugged by so many people had blown the walls away.

The next morning, I rose to a silent campground. Everyone was still sleeping after the long night of celebration. I trudged towards the bathroom but paused, awestruck, as a bull moose with a full rack, towering at least 10 feet high, snorted softly as he meandered past me, continuing on across the campground. And as amazed as I was, it also felt par for the course. I was somehow different now. My world had been cracked wide open. I had stood on mountaintops! Slept with bears! Bathed with bighorns! And while the wilderness had eased my pain, it was the people from around the world that pulled me through threshold… back toward trust… and hope – so I could find the way back home. 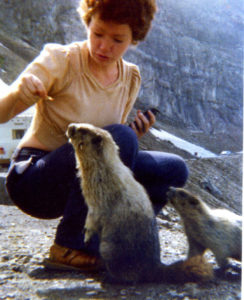 Allison Cox has been telling stories to anyone who would listen since she could talk. She started calling herself a storyteller back in 1982 and has been touring Europe, the South Pacific and North America, sharing her tales ever since. Allison is an author and co-editor of The Healing Heart books on storytelling for healthy families and communities. She was one of the founding board members of the Healing Story Alliance and on their journal staff. Allison fell in love with the Northwest and has been peacefully sharing Vashon Island in WA state with the local wildlife for 25 years now.
, www.dancingleaves.com/allison