Zalka was our New Voices guest writer for the 4th quarter issue of Storytelling Magazine. Her article is posted here to inspire a place for discussion and follow-up. Comments encouraged! 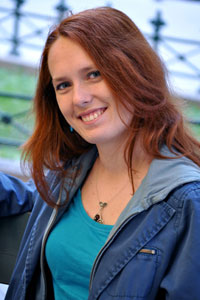 Many people see role-playing games (RPGs) as obscure imaginary worlds, heavy rulebooks, and nerdy teenagers rolling multi-sided dice in their mother’s basement. However, role-playing in its oldest form, off the computer and with a group of friends, is nothing more than pure interactive storytelling.

Here is a short summary of how RPGs work. The group selects a Game Master (GM), also known as the Storyteller. Everyone else in the group is a Player, responsible for one character of his or her own creation, an alter-ego in the world of the game. The GM is responsible for keeping the story going forward; the Players play characters within the story. Their decisions determine how the story progresses. For example, when the GM announces “You arrive at the gates of the castle, but they seem to be locked” the players have the chance to decide how their characters would react to this development, and then announce their actions: “Well, since I am a warrior, I’ll just try to kick the door open.” They don’t have to stand up and act it out; no props or costumes are needed, only the words that describe what happens, and the minds that create the scene. There are several different character options: warriors, wizards, healers, tricksters, storytellers, and dozens of others, depending on the game world. The element of luck and chance in the game is represented by multi-sided dice, which are a lot of fun to roll.

Even though there is officially one Storyteller in every game, the whole group is responsible for moving the story forward and making it fun for everyone. RPGs are non-competitive: to complete a quest, players work as a team, and if they do it well, they win as a team. This makes these games very useful for teaching social skills.

There is a reason why I am writing about all of this here and now. RPGs are popular with audiences that many storytelling events have been lacking lately: young adults. Many times gamers pretend to be bards or storytellers for years without knowing such a thing exists in our world as well – as a profession, none the less! On the other hand, storytellers might not be aware of these new imaginary worlds that capture the attention of so many young people.

RPGs are a great way of exploring the world of legends, mythology, or folklore. They actively engage all participants. They are not only fun in the moment, but also create stories that players keep telling to each other often years after the game itself ended. From playing in a group lasting friendships can emerge, and through imaginary adventures real memories are born. The whole variety of oral tradition, from mythology to personal stories, is included in the gaming experience.

Storytellers who have a foot in both worlds are just starting to create connections and build audiences all over the world. We want to see gamers taking up storytelling, and we want to see storytelling incorporated into games. We want to see storytellers exploring the modern folklore that these games represent. We encourage our fellow tellers to try out games they find interesting. From classic fantasy (Dungeons & Dragons) to ancient gods in the modern world (Scion), ventures into folktales (Grimm), or the quest to save stories from being forgotten (Changeling: the Dreaming), there is one for every taste!

Let’s bring storytelling in its many real world facets to events where gamers can be found. We hope to find, transform, and promote the best of both worlds – and have a lot of fun playing our own storytelling game!

Zalka Csenge Virág is an international storyteller from Hungary, currently visiting the USA on a Fulbright scholarship. She is a graduate of the ETSU Storytelling program. She travels the world telling stories in three languages, and is also a writer, gamer, archaeologist, and recovering contra dance addict.