One sunny September day I was leading a nature walk at an environmental center in northern Indiana. We were in a grove of small trees with large, soft, tropical-looking leaves. In fact, this was the northern edge of the range of the tropical custard apple family.  In Mexico and Central America I had sampled sumptuous exotic fruits from this family—fruit with exotic flavors and colorful names, like guanabana and cherimoya.  On the Caribbean islands I had relished the soursop, and  learned to listen for the excited raspy calls of the bananaquit birds in the scrub areas announcing ripened sweetsops.

Well, right there on this cool autumn day we were about to get a taste of the tropics.

Yes, we were indeed…

Way down yonder in the pawpaw patch…

However, the reality was, we weren’t exactly picking up pawpaws and filling our pockets. We only found one pawpaw that day—just one perfectly ripe fruit to share with thirteen people.

The pawpaw is actually North America’s largest native fruit, occasionally weighing more than a pound.  But this pawpaw we found was more typical—about four inches long and shaped like a short cucumber or a stubby green banana. (Sometimes they are called Indiana bananas.)  I really wanted to share this marvelous fruit, so using my bark backpack as a cutting board I began carefully slicing. The flesh was a smooth creamy yellow with large brown seeds.  Soon I had the entire fruit in slices and I passed them out.  Each person took a piece and there was enough for everyone. We each ate our slice and the flavor was awesome!  We were transported by sharing the succulent sweetness and the creamy sensuality—the perfect ripeness. It was mind altering. 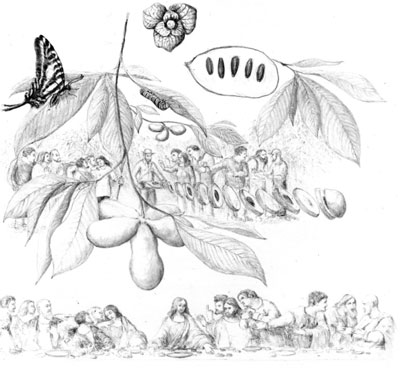 Then a strange thing began to happen—I began to feel like a minister who had just handed out communion. I started hearing voices. My head became full of words… words I’d heard in church.  “Take. Eat. This is my body which is given for you: do this in remembrance of me.”  These words are from the Bible (Luke 22:19) they are Christ’s words, spoken at the last supper as he broke the bread…but there in this Indiana banana patch, it was coming on strong…it all seemed so clear.   Then more words:  “Whosoever believes in this shall not perish and they will have everlasting life—because they will know they are part of the Whole, the One, God’s creation, that Great Mystery, and as a part of that Eternal Cycle, we will not perish and we will have everlasting life.” (We ARE everlasting life.) I realized this is the message that Creator, Earth Mother—that God says to us every time we eat, breathe, or partake of our sustenance. Every meal, every breath we take, every flower we sniff, every berry we nibble is a sacrament—part of the body of the creator; as are we.  It is a sacred offering and it all comes as the gift of Creation.   Whew!  Let me tell you; that was quite a pawpaw!

Doug Elliott is a naturalist, herbalist, and storyteller who tells many stories of his encounters with the natural world. This is an excerpt from his latest book, SWARM TREE, Of Honeybees, Honeymoons, and the Tree of Life. Whether he’s singing about catfish, pontificating on possums, extolling the virtues of dandelions, telling wild snake tales or wailing out a jivey harmonica tune — either on a backwoods trail or in a concert hall — Doug Elliott will take you on an unforgettable, multifaceted cultural tour of North America’s back country. He performs a lively collection of traditional tales, ancient legends, inspiring stories, folklore and outrageous personal narratives. He flavors them with regional dialects, lively harmonica riffs, fact stranger than fiction, and more than a few belly laughs. www.dougelliott.com/