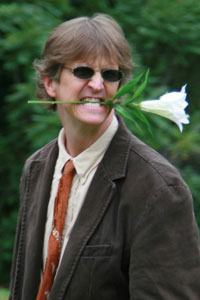 For my contribution to the NSN Blog, I am much too lazy to offer anything different than what I am already working on, which at this time is a book on humor theory.  E.B. White wrote, “Humor can be dissected as a frog can, but the thing dies in the process and the innards are discouraging to any but the pure scientific mind.”

I am out to prove him right.

When you were casually browsing through your Aristotle, I am sure you came upon this: “Only the human animal laughs.”  Whatever your philosophical bent, let us all agree to agree on that, please, for I know there are those of you who take a Scientific/Evolutionary approach to the origins of humor, and others of you insist on a Creationist view.  But just to keep everyone happy, (or equally offended) and in the spirit of fairness, I will flip a coin to determine with which presupposition to begin. The coin I have chosen for the flipping is a 2005 Commemorative Quarter honoring the State of Kansas. This coin has an American Bison embossed on the back – it is the first appearance of our nation’s official bovine on U.S. currency since the phasing out of the Buffalo Nickel in 1938.  I have chosen this quarter because it is the first one I found in my pocket.

Comedic anthropologists agree: minor pains or mishaps befalling one person or a group of persons witnessed by other persons brought on all primitive human laughter. The earliest, most basic language had not reached a sophistication necessary to form a verbal joke; early conversation was elemental, structured merely around the three rudiments of survival: (1) protection, (2) alimentation, and (3) shelter.

The above number three (3) gave rise to the occurrence of the first intentional laugh, which came in the form of, what we would now call, a practical joke. Administered by a primitive farceur, it was an act of physical comedy, designed to create a situation conducive to an individual coming close to being seriously injured (funny), but not quite to the point of death (not as funny). Anthropologists concur that within the Paleolithic Cave paintings of Lascaux, France, a scene is depicted wherein one person – let’s call him Iocus – is altering the primitive hammer of his friend  – we’ll name him Plumbus.  In the first panel of what may be the first comic strip, Iocus is untying the knot in the rawhide string holding a rock on a stick.  The tying of an object requires tension in the cordage; untying brings about release.

Iocus had gathered all the people in the village to watch Plumbus in anticipation of his attempt to use the altered hammer.  Those who were witness to the event were rewarded for as Plumbus made his upswing, the rock came free. As the empty handle struck the ground, the previously skyward rock began its descent.  Plumbus, astonished, raised the empty stick to his eyes and within a second or two the rock struck him on the head.  All who witnessed the rock flying off the handle fell into laughter, except, of course, for Plumbus, who, himself, flew off the handle. Allow me to confirm your supposition; in the advancement of language beyond its aforementioned elemental-survival form, many linguists feel this event brought about the advent of the metaphor.

Furthermore, when the rock came to rest on the ground, after bouncing twice on Plumbus’s head, the sound it made can be best described as, badda-boom. It is the opinion of this soi-disant socio-lexical acoustician that the retelling of this event saw rise to the use of the onomatopoeia.

Ah, yes:  the retelling of the event, or more is to the point, the telling of this or any event brings on the ability to relive the event.  Retelling, reliving and finding the wit within – by creating tension and release – that is this storyteller’s main gig.

Andy Offutt Irwin is a storyteller, whistler, comedian and arts educator who lives in Covington, Georgia.