Her Story, Your Story, Our Story:

An Afternoon With Women Who Have Escaped The Troll

What message do you want to send to other women who’ve been captured by a “Troll?

“Love yourself enough to leave.”

A few years ago, I spent time with a group of women in a “resettlement” program. These are formerly incarcerated women who had come through abuse and who were actively in the process of changing and reclaiming their lives. The women were part of a support group that was meeting once a week at the Community Partners in Action Resettlement Program in Hartford, Connecticut. I brought fresh strawberries from my friend’s spring garden, an old European fairy tale, and some questions.

I had recently helped launch a non-profit film company, Healing Voices-Personal Stories (hv-ps.org), whose mission is to bring awareness to women’s strivings to overcome abuse through the distribution of film and video. 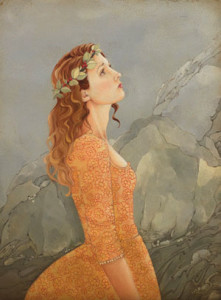 Having worked with women in several correctional facilities, both before this particular workshop, and since that day, I am keenly aware that women who end up in jail generally have a history of abuse. Bad stories; bad endings. But do all bad beginnings have to have bad endings? Is there a way to learn and grow a new story? Under the auspices of Healing Voices-Personal Stories, I found my way to that group of women in Hartford with a Grimm’s tale.

The story I brought that day, Old Rink Rank, could, indeed, be one in which the maiden is rescued by a prince charming or even one with a bad ending; instead, it brings a princess back from the abyss by her own efforts. The story describes the trials of a princess whose father, the king, creates an impossible test for her suitors. Only by crossing a glass mountain without slipping and falling will one of them have her to wife.

Many men, of course, try. It is understood that along with a wife, they’d get half the kingdom, or at least a chunk of it! So we have the archetypal passive maiden, awaiting her fate.

At last a young man, one who loves her, seeks to win the princess. The young woman takes his hand and climbs the glass mountain with him. But it is she who slips and falls through a crack which opens suddenly, swallows her, and immediately closes. After looking for her, the young suitor returns to the king who sends out the army to search for her. No one can find her. She is on her own.

The young woman has fallen deep into a cave in the mountain where she is forced to become the house drudge of the long bearded Old Rink Rank. She must cook for him, clean for him, and make his bed. She loses all sense of herself, even forgetting her own name. The old troll calls her Mother Mansrot.

Years go by. There is no way back, no obvious way forward. There is no external help available. The change in circumstance must come from within the woman herself. When she hits rock bottom, something shifts in her psyche. She makes and acts upon a plan, finds her voice and ultimately finds her own way back up to the light.

The original text does not give us any details, but the story tells us that one day, after cooking and cleaning and making his bed, she locks the doors and windows so that when Old Rinkrank returns from his daily plundering of the world’s gold and silver, he is locked out of his cave home. He calls to her:

“Mother Mansrot, open the door for me.”

She traps him by his long beard in the one open window and will not set him free until he gives her his magic ladder by which she climbs out of the mountain. This princess is rescued, not by a prince, but by her own will. Upon return to her father’s house, she marries her true love. Her father, of course, sends troops to kill the old troll.

I told Old Rink Rank to the women, adding my own voice, asking a question or two within the telling, but not changing the original Grimm version. It is a spare story. It is a very clear story. The women in our group listened with great attention, nodding at times, often uttering a chorus of “uh-huhs” at recognizable moments in this story of abuse and redemption. After the telling, in response to my questions, as well as their own, they fleshed out their understanding…and mine…of this classic tale. Our discussion was lively, filled with recognition and gritty wisdom.

The women very much took control of the conversation, finding questions and answers themselves, often engaging in a kind of debate over issues raised in the story. Why is it she helps this particular young man? What is that mountain? The crack? Why does it take so long for her to say “no.” What ultimately gives her the strength to defy him, to lock him out, and to escape back to the world of light and love? We looked at how easy it is to fall though the cracks, losing ourselves to the “trolls” ever waiting to use us for their own purposes. The story does not tell us how and why the Princess turns her situation around. But these women voiced their strong opinions:

“All that hard work gave her strength.”

“When you hit rock bottom, when you are fed up, that’s when you make the changes.”

We also discussed two possible endings. The Princess, having trapped the old man by his long beard, sets him free once she has returned to the world. In the Grimm version, her father, the King, has him killed. We looked at the justice of this. Then we looked at a more forgiving model, the possibility of not taking revenge. There are consequences to taking revenge. Is there the possibility of a different kind of justice?

As our time was quite short, we did not plunge deeply in to our own personal stories. The case workers and therapists who joined our circle said that they would follow up on our session. My job that day was to bring the story, to bring the metaphors and ask (or encourage the participants to ask) the questions. However, it was clear that all of us, group members, case workers, and I, recognized aspects of our own lives in this timeless tale. And working with it in this way helped us all clarify and enlarge our understanding of our lives.

Several of the women stopped to hug me on the way out. Two of the women came up to talk with me. They both said that as children, they were read the old fairy tales, but that they had not understood that “those old stories actually meant something.” Ah! This storyteller quoted a favorite adage in the storytelling world: The stories are not good because they are old; they are old and still told because they are good. And they do, they most definitely do “mean something.”

Storytelling is not just kid stuff. We, the storytelling community, know this. Indeed, we know that “kid stuff” can be, and should be, at its core, meaningful. Life long learning begins with those bedtime stories of survival, of compassion, of what life holds, offers, and teaches. And for those whose stories takes some bad turns, stories and storytelling can help us find our way out of the woods and home. 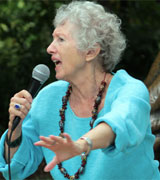 Regina Ress, storyteller, actor, writer, and educator, has performed and taught from Brazil to Broadway, from homeless shelters and prisons to Lincoln Center and the White House. She has appeared in numerous national and international storytelling festivals. She teaches storytelling for NYU’s Educational Theatre and Multilingual/Multicultural Studies Programs and ESL for Artists at Santa Fe University of Art and Design. Her CD of New York stories won a Storytelling World Honor award and she is recipient of the National Storytelling Network’s Oracle Award. Regina believes that storytelling connects us to each other and to the deepest parts of our Selves. www.ReginaRess.com http://hv-ps.org/ 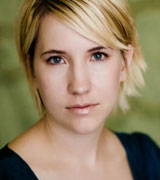 Emily Christensen McPhie was born in Utah in 1978 into the highly-artistic Christensen family. Growing up, the pursuit of art was second-nature for McPhie, who went on to win awards for art in high school and beyond, graduating from Brigham Young University with a Bachelor of Fine Arts, with an emphasis in painting. Emily currently resides in Chandler, Arizona with her husband Gavin and daughters. Emily’s original paintings are sold on her website: http://emilycmcphie.com/ Emily asks: “Do you have an Old Rinkrank? The thing that kept you from dusting yourself off after a fall and climbing back up the mountain. Something that held you in place, going about your everyday motions long enough that you almost forgot your goals, hopes, desired outcomes.” For the entire story of Old Rink Rank and information about the symbolism behind her paintings of the tale, go to: http://tendernessandtoil.blogspot.com/p/old-rinkrank-paintings.html