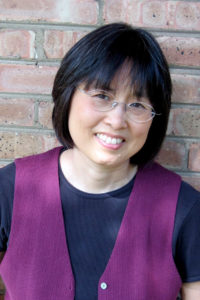 In my family, we never told stories about the past – what it was like for my grandparents to sail from Japan to the United States, the early days in Oregon with the family grocery store, the terrible time following the attack on Pearl Harbor, or the experience of living behind barbed wire in an incarceration camp during World War II.

It wasn’t until I was in my fifties that I started to ask the questions. I decided to make a family photobook and I got lucky. My family still had, unbeknownst to me, photographs from the old days in Japan and my grandparents’ original passports and marriage license. I went on a hunt for ship manifests and War Relocation Authority documents. The photobook only included the years up to my generation’s high school days, so I created a DVD with slide shows that covered another thirty-five years.

I also realized that my 91-year-old Auntie Mary, my father’s older sister, was the only member of her generation on my father’s side still living. It was time to ask those questions. I had to move past my own hesitation that years of silence had instilled in me. The interviews that I had with her opened my eyes to those early Portland days and what she and the family experienced during the war.

My family was deeply grateful for the work that I did and the project might have ended there, but I was invited to perform at the JustStories Storytelling Festival by the director, Susan O’Halloran. Since this is a festival inviting themes of social justice, racial diversity, and immigration, I wondered if I could create a story based on my family’s journey to and in the United States. It was a scary thought. My repertoire consisted of folk tales and a few historical pieces.  No personal stories. No family stories.

I plunged in. My aunt could not recall the details of everyday life in the incarceration camps nor could she articulate the historical background behind the events, so additional research helped to fill in the gaps.

In structuring the story my fear was that it would be a boring history lesson. Susan O’Halloran and Beth Horner coached me and helped me to remember to focus on my family and its journey. Performing the story was even harder. How to remember so many details? How to remember the transitions between sometimes unrelated points? I learned to use visual cues in my imagination to go from scene to another.

On the day of the festival, four members of my family, including my aunt, heard our family story. Afterwards, my aunt proudly came to the front of the room to be introduced.

I have now begun to tell this story in museums and middle and high schools. Working on the family history project was one of the most meaningful things I’ve done in my life, and the opportunity to share our story and bring this history to those who might not know anything about this part of World War II has been an honor and a blessing. I am so very grateful for it all.

Anne Shimojima is a third-generation Japanese-American storyteller and former award-winning elementary school library media specialist. She appeared in the Exchange Place of the National Storytelling Festival in 2001 and continues to perform in schools, libraries, conferences, festivals, and museums. She gives workshops on the use of storytelling in education and her workshop on the creation of her family history project and story received a standing ovation at the Los Angeles NSN National Storytelling Conference. The story Hidden Memory is available for audio download at www.racebridgesforschools.com with a lesson plan and discussion questions, and excerpts may be viewed at www.racebridgesvideos.com.