My 9 year old granddaughter is traveling the world with her parents for two years.  The other day on Skype she asked me the question “How did you become a storyteller.”  So I wrote her this blog letter:

To my precious granddaughter, Sydney: 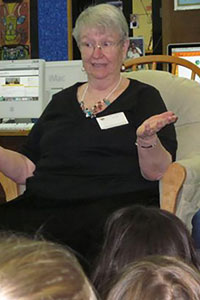 You asked me a question: How did you become a storyteller? I have pondered your question because I think it is an important one.

The other day I attended a program for teens. They asked “Why is it teens are lonely? Why is it they are distressed?” They have 100s of Facebook friends.  They even sit right next to each other and text.

But dear Sydney, texting is not talking. Texting is not listening, empathizing, caring, hugging, and crying together.  The words may be there but the human contact is missing. We need to hear and tell our stories. If we don’t tell stories, we begin not to care and are mean to each other.

It is only recently I have thought of myself as a storyteller. As a college professor, I always liked to illustrate my lectures with stories of science, of challenges, of epiphanies. But I never thought of them as stories. I called myself a scientist, a researcher but not a storyteller.

Everything changed in the year 2000. As a scientist I had studied fire ecology and the influence of fire on the ecosystem for many years. That year the Cerro Grande fire raged across our mountain. Twenty thousand people were evacuated. Cell phones were a rarity. We did not know where our friends and sometimes our family members were. Were they in a shelter? Were they with a kind soul who took them in? Were they in a motel? Many lost their homes but everyone was grieving.  Everywhere we went we heard the stories of kindness of neighbors and strangers, of loss, and of gratitude.

When we were allowed to return back to Los Alamos, everyone had a story. Everywhere we went, to lunch, in church, in the hallways, stories were told. That is when I realized the importance to storytelling. Children in one school made a quilt and on that quilt were stories of their loss, their anguish, and their realization about life. One child said “I learned it was O.K. to cry.”

My talks changed from pure science to science and story. I realized grief extended beyond the loss of property but also it was about loss of a beloved landscape covered by trees. I began to take people out to see how nature heals, to tell nature’s story. How nature gives us hope.  I went to other communities to tell our stories of loss, of grief, of hope.

I changed my view of myself. I realized the only way a scientist truly can express their science to the non-scientist is through story. I began to say “I am a storyteller but I am also a scientist.” Science is about the head and story is about the heart.

Today when I give a talk, I no longer just look at only the science, the head part, but try to incorporate our human understanding and give heart to the subject through storytelling.  I recently gave a PBS Science Café talk on ravens. The combination of the science of these funny, intelligent creatures and their perception by humans today and in the past gave them more interest and depth. One small boy went away telling his grandmother, “I thought they were just birds.”

Today people introduce me as a storyteller, a scientist, an artist, and a writer. I no longer feel uncomfortable when they call me a storyteller. I know where true healing comes from.  As a scientist, I know we can solve problems and give answers to many things, but science does not often change the heart—that comes from storytelling. Listening and caring for each other.  Experiencing another’s pain, successes, joys, and sorrows these are all universal human experiences.

The other day, you asked your parents the question,  “Why people are so mean to each other?”

Sydney, because I see people mean to each other, that is why I am a storyteller. You are traveling the world.  Because of your travels, you will have many stories you can tell.  Experiences that are now stored in your little heart.  Hopefully, when you and I tell stories, we can help people learn not be mean to each other.

Terry is an ecologist, writer, artist, and storyteller.   Stories written and told orally are means for Terry to express the sense of awe and wonder that she finds in nature and the world around us.  Don’t miss Terry’s workshop at the 2014 National Storytelling Conference, July 24-27 in Phoenix/Mesa, AZ:  “Touched by Fire: Igniting the Flames of Healing.”  This workshop will showcase how storytelling helped people heal from evacuation and loss after a wildfire, which can translate to the healing process after any disaster.