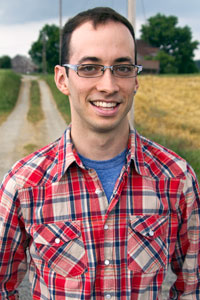 I recently attended a garden party in Cleveland to celebrate my friend Sarah’s musicology doctoral graduation. She has spent the past few years studying Anne Botta, a 19th century salonnière whose New York home was an important gathering place for writers, musicians, artists, and at times, celebrities. Sarah’s research looks past identifying the significance of individual pieces and composers, and towards the existence of music as a monument of the gathering. Music was a necessity that served a purpose greater than entertainment or display of crafty genius.

I couldn’t help but think that the guests at this garden party, a varied group of creative compatriots assembled from across the United States, were in a way reliving what might have been parallel to an evening at the Botta salon. To some cultural degree, our gathering brought back to life a particular convivial moment and depended upon each participant’s presence and interaction to exist.

As the day grew long and the guests left, the meeting returned to a dormant state of suspension, awaiting a future time when people would reconvene and resuscitate such an important part of civilization: gathering and communicating.

Much like the Botta salon and the garden party, the idea of story and its telling permeates our being but lies in a state of suspension until brought out of the mind and into the arena of ‘existence.’ I wonder, though, if those of us who tell are thinking enough about how powerful story is, and that it means much more than most of us are willing to discuss. Too often we think of story as a job (and all too quickly as an industry), and that we can ‘become’ story tellers by learning a few stories, making a recording, and then drawing up contracts with people to hear those stories. It is true that this is a model. To our advantage, we can market the word ‘story’ as we wish. After all, ‘story’ has until very recently only been part of folklore and most people outside of the storytelling ‘world’ don’t know much of what it means. But it seems that many of us on the inside don’t fully know what it means, either. Why aren’t we talking about the dangers of such liberty, and in particular, how to protect story and preserve what it means as a function of who we are?

We must remind ourselves that we cannot be too quick to overlook the antecedence of story for the sake of making a few quick bucks. Who were those diligent participants of humanity’s cultural salon (or garden party?) – those who brought story out of the mind’s state of suspension and into the consciousness of the community? Does not nearly every subculture and group of people traditionally have the storyteller as a member – and to how many cultures is story sacred, historical, pedagogical, and explicative? And do we consider these values when we stand in front of a gathering to tell our stories?

If we are not careful with out treatment of story – in particular, if we do not continually seek an answer to the question “Why story?” – then we run an increasingly greater risk of losing identity, thus removing the culture from our salon and dissuading guests from participating in the story party.

Adam Booth tells stories influenced by his Appalachian and Jewish heritage. He is a three-time champion of the West Virginia Liars’ Contest and winner of storytelling competitions in three other states. In 2011 the National Storytelling Network honored his promise as a young teller with the J.J. Reneaux Mentorship Grant to work with Dovie Thomason. His first recording, The Mingo Black, is a series of original West Virginia tall tales and family heritage stories.