Inside A Person’s Heart:
Finding Solace from Stories and Poems

In each setting where I have worked with children and teens who have experienced profound loss, they have told me of the comfort they find in hearing each other’s stories; that they feel less alone knowing that someone else feels as they do. One student I worked with spoke for many, writing simply that poems share the loneliness inside a person’s heart.

When we grieve, time as we know it is altered. Our grief takes us on a journey in which time is divided into “before” and “after.” Our lives before the loss seem a world away from the changes with which we are confronted during and after loss or upheaval. Our sense of ourselves and our lives can become unsteady and dislocated. A child may not be able to articulate this, but experiences it nonetheless. 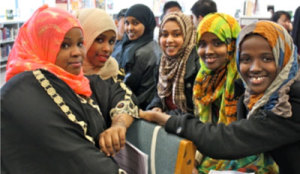 I have found that stories and poems can provide children with a framework that helps them negotiate the dramatic and traumatic changes in their concepts of time. Because past, present and future can intermingle within a story or poem, young people can learn to evoke not only memories of loved ones and loved places, but also they can imagine a better future. Often stories and poems provide a framework for arriving at a hopeful state through the courage and resilience present in the tale or the poem.

In my work for the Stories of Arrival: Youth Voices Poetry Project, which serves refugees whose lives have been shaped and shattered by the consequences of war, I often feel a sense of inadequacy. What do I say to them about the immensity of their losses? I find I can only tell them of the honor I feel—the privilege of witnessing their stories and poems. Even so, I often wonder if writing the poems and telling the stories is enough. I want to assure them of their safety and their bright futures, but I cannot because I don’t know if their new lives in this country will bring them the succor and success about which they dream. I do know that my task is to trust the plentitude of language in the ways it allows us to bring words to our sorrow.

One of the students with whom I worked in this project, now in its fifth year, at Foster High School, the most language diverse high school in the U.S., was Bu Meh. She is a shy young woman who astonished me with the depth and power of her poems.

Bu Meh is from Burma. She is Karen, an ethnic group that has suffered conflict with the Burmese army for over sixty years. After much hardship and loss in her country, Bu Meh spent six years in a refugee camp in Thailand. When I invited the students in her English Language Learners (ELL) class to create poems that would serve as a metaphorical box for safely storing images, memories, secrets and their heart’s truest feelings, Bu Meh wrote about her grief over her father’s death. 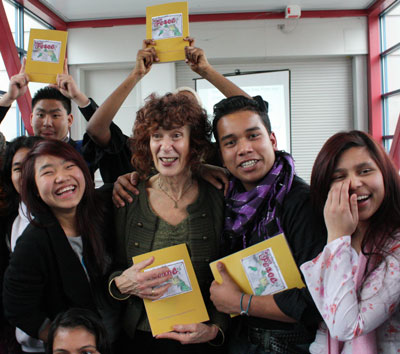 I will put in my box of memories
The sky full of clouds and birds that could not fly,
the tears falling down my face like a river
because I cannot forget that day my father died,
the day my heart hurt the most,
like a knife
poked into my heart.

It was the saddest day,
my heart was broken.
I saw my father’s face
for the last time
in my life.

I will put in my box of memories
The sound of rain, wind blowing,
the Biglu River moving fast…. Howl, howl, howl,
a bird singing a song on a tree,
and always my father who loved me.

I think the relief of writing a poem that spoke directly to her sorrow allowed Bu Meh to tell more of her story. Her poetry has continued to give expression to the ache and anguish of her memories and to her hopes for a different and better future. In her second poem she wrote in part,

War made you feel bad,
Children hungry, crying, looking for food.
Children starving,
Soldiers killed our animals,
Stealing our things,
Burned our farms and our villages.

I remember when I was eight years old,
Soldiers took my father away to have him carry
their weapons.
Soon after he left, I heard the gunshots.
We worked with tears, and ate with tears.
I left my country, my community, my possessions,
and
my home.

I hope one day there will be freedom in Burma.
No more children crying, going hungry.
I pray that there will be peace in Burma,
I pray for revolution and for democracy.
I miss my country.
One day I will return to my homeland.

The losses shared by the young people with whom I worked at BRIDGES: A Center for Grieving Children, in Tacoma, WA were similarly profound. Each child or teen in the BRIDGES program has lost a family member to illness, suicide, homicide or violent death. In my work as a storyteller and poet at the center, I collected and told stories that touched on and celebrated the continuity of life.

After a death in the family, especially the death of a parent, children will often feel that their basic survival is under threat. Who will take care of me? They wonder. What if I die? What will become of me? Although children may not verbalize these questions and fears, they are a part of the child’s inner story. Many traditional folk and fairy tales from all cultures give the message that nourishment and survival will take place, answering in their subtle and timeless way to the “real life” predicament of a grieving child’s fears, questions and anxieties.

For example, I told literary folktale written by Jane Yolen, called “Greyling” to a group of seven-to-nine-year-olds who had lost a family member. The story is about a fisherman and his wife who have remained childless for many years, until one day the fisherman discovers a seal put stranded on the shore. Upon bringing the seal pup home, the couple is stunned when they realize that the tiny seal is a selchie, a being who transforms into human when on land and becomes a seal again upon returning to the sea. They name their child Greyling, and his mother says, “We will never let him go.” Yet, at the story’s dramatic end, Greyling is called back to his own realm and swims triumphantly out to sea. Ultimately, though deeply grieved, Greyling’s mother comes to terms with her loss and tells her husband, “Though my heart grieves, I understand we had to let Greyling go to where his own heart was called.”

This tale, like many stories, carries deeply felt themes of loss and it wisely concludes with the necessity of having to grieve and let go before reinvesting in life.

After I told this story, I asked the children to write about the images they pictured when they heard the tale of “Greyling.” One of the girls in the group, a nine-year old who had lost her mother to suicide, wrote,

I see the scenery
and the hut made out of moss
near the cliff,
and I can see how high the cliff is
and the sea.

I think I would be the mom
because she cried over her “loss”
and I cried over my “loss.”

And a seven-year-old whose brother had died of cancer responded with this poem:

I see the mother crying
because she did not
have a child
then, she realized she
had to
let her child go.

but the child she had
turned back into a seal,
it swam back to the sea,
I will always love my brother.

I am honored to be among those poets, storytellers and teachers who create the safe spaces that allow young people to bring forth their stories and poems of loss. We do not want to lose children to unspoken sorrow and grief, knowing that in helping them tell their stories we can support them in becoming more whole. 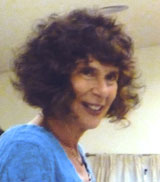 Merna Ann Hecht, storyteller, essayist, poet and teaching artist founded the Stories of Arrival: Refugee and Immigrant Youth Voices Poetry project at Foster High School in Tukwila, WA, the most ethnically diverse high school in the U.S. She received a 2008 NSN Brimstone Award through which she worked at BRIDGES: A Center for Grieving Children in Tacoma, WA. Her forthcoming book, Companions for the Crossing: Stories & Poetry for Young People who are Grieving Losses is based on her extensive work with youth facing trauma and loss. Merna teaches Creative Writing and Social Justice courses for the University of WA, Tacoma. Her work as a poet, storyteller and teacher is focused on children’s well-being and human rights for all.