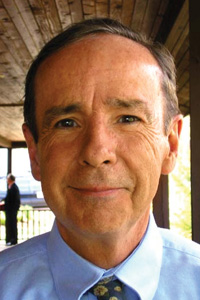 A question that is often asked of me is “How did you get started in Storytelling?”

for the family. It meant that my Mom had to take the clothes down from the line. We hung a sheet on one of the rafters to serve as a curtain. I don’t remember what story we acted out that first time. I do have a clear memory of placing a towel over my shoulder to serve as my prince’s cloak. I was the prince, my sister was the heroine to be rescued. And I remember the applause at the end.

Not too much has changed since those days, except for the location of my shows. I am still working closely with my sister, Nancy Clancy. But she’s the one that does the rescuing now. Although she doesn’t take part in the shows anymore, she does oversee my touring schedule, setting up the arrangements with sponsors, pinning directions on my luggage as I head for the airport, making what I do as a professional storyteller possible. And I am very grateful to her.

As I write the words “Professional Storyteller”, I chuckle. It is a job that didn’t exist when I was growing up. There never was a visitor on Career Day in high school that told us about the skills and training needed to prepare ourselves for the profession. I never imagined that I would be able to apply my natural skills as a class clown to make a living doing what I love – developing versions of traditional, literary and classic stories, performing them all over the world, to varied audiences who bring their own insights to the venue to help me sculpt the material into final form.   Being able to do this is one of the Personal Miracles of Storytelling.   But it is only one of many miracles. However, I don’t think of it as Magic.

There is a lot of talk about the “Magic” of Storytelling. Sometimes the word appears in publicity documents as a way of bringing audiences to a festival or performance, or to entice them to join a group that participates in that magic. Sometimes the word appears in presentations or seminars as if it really described what happens in the Storytelling Event.

This talk about Magic makes me very uncomfortable. If taken literally, it implies a realm of power and the manipulation of that power by the storyteller who plays the role of sorcerer. This paradigm of the storyteller as magician has its basis in primal societies where certain individuals are given rigorous training to prepare them for the role of manipulator of Mana (power) for their tribe. Applying this model to Contemporary American Storytelling is less than helpful. For one thing, ours is a pluralistic, multi-cultural society, which lacks the unifying simplicity necessary for the world-view necessary for belief in shamanistic medicine.

For another, our society lacks the rigorous training for the shaman-candidate to take on the mantle of the shaman. The sorcerer’s apprentice can wreak havoc, as Disney so clearly showed us in Fantasia, when Mickey misread his master’s book.

And so, in my workshop, I will take another tack, apply another model – that of Science. It is my hope that applying the tools of Science to the Storytelling Event, we can reach a better understanding of what really goes on. Science can bring us to the edge of the Miracle, then, after which it falls silent.

The workshop is then about the Miracle of Storytelling. In a sense, it is an inquiry into the dynamics of the Miracle.

It is a Miracle, for instance, that, in our electronic age, when the television, video games and the home computer vie so strongly for our time and focus, that people choose to come together for the simple pleasure of attending to a story.

A self-described “full-time Daydreamer who moonlights as a Storyteller”, Ed Stivender has entertained audiences around the world since his debut at the Jonesborough Festival in 1980. Dubbed “the Robin Williams of Storytelling” by the Miami Herald and “the Catholic Garrison Keillor” by Kirkus Reviews, he is the author of two books and numerous recordings.

A popular workshop leader and MC, he is known for his delightful mixture of whimsy, wit and wisdom as he invites his audience to an interactive dance of the imagination. An award-winning Philadelphia Mummer, he was inducted into Storytelling’s Circle of Excellence in 1996.