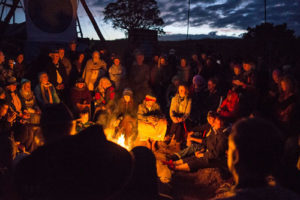 VERMILION — Since the beginning of mankind, the art of storytelling has been a tradition, a socialization, a teaching tool, entertainment and a means of keeping history alive.

But it is an art that seems to be slipping away, says professional storyteller Donna Kuczynski.

An Amherst resident for 50-some years, Kuczynksi was always captivated by a good story but didn’t realize its power until two dear friends suffered strokes; one was left unable to speak and one ended up with Alzheimer’s disease.

With a background in nursing, she began to notice during hospital visits that a patients’ visitors often sat and spoke to each other over their loved one’s bed.

“Nobody was paying any attention to the person in bed and it was because they couldn’t respond,” she said. “But if you told them a story, they became socially involved. That stimulated my appetite. I became enthralled with what storytelling could do.”

That interest led Kuczynski, now 83, to a storytelling class at Kent State University, which introduced her to a woman connected to the Cleveland Storytelling Guild. At first she joined as a “listener,” intimidated by the thought of telling stories in front of a crowd.

That was some 30 years ago. Within a few years, she built up the nerve to step up and tell stories, too — and is now vice president of the Western Reserve Society for the Preservation and Perpetuation of Storytelling (WRAPPS). The group grew out of the Cleveland group and changed its name to make the national organization that promotes storytelling. For the past two decades, she has led the youth of the group, bringing up the next generation to preserve the art of telling tales, not the easiest task among today’s Internet-isolated culture.

“She has long been a driving force behind the association for a long, long time, especially with the youth,” said Carol Cunningham a listener and treasurer of the group. “It’s pretty phenomenal when you see these kids as young as third- or fourth-grade and see them tell their stories.”

Kuczynski spent time telling stories at nursing homes to Alzheimer’s patients and in juvenile detention centers, then moved on to leading students at St. Mary’s Catholic School in Vermilion. She did that for 16 years before a stroke and spinal surgery changed her plans. She now meets kids once a month at the Nordson Depot in Amherst to work on their storytelling skills, while still traveling locally to tell stories herself.

She will appear tonight at Mill Hollow’s Fireside Storytelling program along with other storytellers.

“The more involved our kids are getting with technology, the more important I think storytelling is and the more necessary it should be,” she said. “I’d like to see the basic principles of storytelling begin in first grade in school curriculums. It’s so important.”

Kuczynski said so much more than entertainment is involved in storytelling, such as a passing on of legacies and histories, and help knit people together by finding common ground across the ages.

“Kids don’t know their family history, they don’t know history. Kids are being filled with apathy, not empathy,” she said. “Storytelling is nothing more than an opportunity for individuals to help other individuals open some windows in their minds to remember and celebrate, people, places and things.”

“It’s a legacy grandparents need to claim for the betterment of their grandchildren coming along. Grandparenthood is a second chance. Parents don’t have that chance because they’re too busy making decisions, what’s right or wrong, what we can or can’t do, how far will the money go,” she said. “When you’re a grandparent, you don’t have to do those things. You can hug a little more often, and you can see a little more clearly — even though you might have tears in your eyes.”

Storytelling helps with problem-solving – Kuczynski points to simple nursery rhymes that begin to teach children ways to figure out problems the characters face – and standing before a crowd to tell the story teaches confidence and public speaking.

“Those are skills that will take them far in life,” Cunningham said.

Kuczynski said every storyteller gets his or her stories from different places. She is not a writer, so she finds stories from many different sources, even stories written long ago by her son. All storytellers are expected to credit the author, if appropriate, and if at all possible they are taught to contact the author for permission to tell it. But stories — no matter the source — are formed by the teller. She encourages her tellers to know the beginning and the end, but the middle is “up to them.”

She does not want her students to memorize stories. If they did, she said, then they could be thrown off track completely if interrupted by any number of things that can happen during live performances. But if they know a story and have made it their own, they are not deterred.

National storytelling conferences have grown in popularity over the past decades and the group often sends some of its youth tellers to the conferences, to learn and to perform.

“I hope storytelling is still alive and well. I have great concerns where the written word is concerned. It breaks my heart to see newspapers going out of business. Any community without a paper has shot itself in the foot. It’s up to communities to keep them alive and well.”