Listening To the Fool: Breakthroughs In Understanding

In my early twenties, I went through a very polarized time in my life when I was experiencing a “double immersion”. On one hand I was very involved with an old and somewhat obscure spiritual tradition that cultivated deep self-observation and continuity of awareness by breaking down mechanical patterns. While, on the other hand, I was acutely consumed with a corporate career in Silicon Valley as a technical recruiter, or – as others would call it – a “headhunter”.

It was during that time that I first started working with a healer, and in one of our sessions together he mentioned to me, almost casually, that I, too, was a healer. Being both an inveterate left-brainer, as well as a skeptic, I did not give it much importance back then. In fact, I fought it for many years, as my life continued to unfold on and off the straight tracks of my linear understanding.

I did not want to remember what he had told me. And so I repressed that memory, until it unapologetically resurfaced many years later, when my life started to unravel.

And then I understood the reason why I had been refusing to think about it:

I knew too much.
That’s when I met the Fool.

With the clients or groups I work with these days, we sometimes utilize a panoply of archetypes to symbolically represent their life situations or specific challenges they are facing. Re-introduced into the mainstream awareness of the Western world through the work of C.G. Jung, archetypes are actually very ancient tools, recognizable in most indigenous and mystical traditions. They have a particular quality of explaining without really diminishing the mystery of existence, and engaging both brain hemispheres in the process of understanding. In some ways, the archetypes belong more with a shaman’s paraphernalia than a scientist’s lab, yet still manage to successfully straddle that divide. 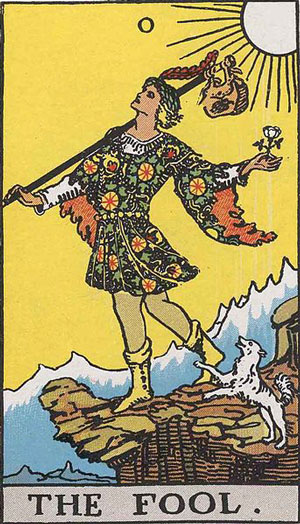 The archetypes we work with, in our processes of self-exploration and healing, are sometimes of Western origin and articulation (like Gillette and Moore’s “King, Warrior, Magician, Lover” or Pearson-Marr’s twelve archetype system), sometimes of Native American influence (animal totems) or even ancient mythological motifs (Greek, Roman, Hindu). There are many cross-references between these varied archetypal palettes, as well as unique flavors that make one or another particularly suitable to use in certain moments.

Amongst the archetypes, one that stands out as present in all the cultures from all the continents, with a very peculiar role (and less common than most others) is the Fool. A curious and unusual archetype that defies easy interpretation. In the Tarot symbology, which carries a wealth of encoded knowledge from older psychology systems, the Fool is often the only unnumbered card, although sometimes it is represented as the 0 (the first) or XXII (the last) card of the Major Arcana sequence.

What role does the Fool play in a healing process? What wisdom does a “Fool” story bring that can illuminate a radically new way of looking at a situation?

It is said that Mulla Nasruddin was once found by one of his friends frantically looking for something around a lamppost on the street. Seeing him so distraught, his friend offered some help:

“What are you looking for?” he asked.

Mulla Nasruddin answered, barely stopping to look at his friend: “My house keys. I have lost them.”

“Is this the place you lost them?” his friend wanted to confirm.

“No, I lost them by the door, but it’s very dark there. Here is the only place that has some light for me to look”, Mulla Nasruddin replied.

I first met the Fool when the fabric of understanding that held the world and my life together started to seriously unravel. It helped me realize that understanding alone was not only insufficient, but had, in my own case, become an obstacle to further progress, healing and insight. I was certain that I was making all the right efforts that my mind was able to fathom, along reasonable lines of logic and common sense – but that was exactly the problem! Something else was needed to break through my well intended but ossified conceptions, so I would stop looking around the lampposts in my life and go into the dark.

Sometimes, this “something else” enters our lives as a shock. I have worked with people who have seen close ones pass away, had long time relationships dissolve unexpectedly before their eyes, suffered personal trauma or had it re-activated by recent events. I lost my home, my own marriage ended and I found myself living away from my children. Occasionally, it takes a serious loss to bring us to question or change patterns that have become chronically embedded in our lives.

But there are other ways to intentionally break down solidified thinking and heal the dysfunctional patterns that go with that, before we hit an experiential pothole. And some of these unorthodox ways may require that we give up understanding itself.

A well-known psychotherapist, Dr. Bradford Keeney, who, after a long career in conventional Western psychology decided to switch focus and concentrate on old indigenous healing traditions from several continents, described the alternate view of healing that a shaman holds, as compared to a therapist: “Rather than seeking clarity and understanding, the shaman actually aims for greater mystery.” 1

This is a place where the Fool can be of great assistance.

The Fool stands for “not knowing”. It can also be seen as a liminal state that represents a discontinuity of understanding. It brings incisive questioning and change, and the (dangerously open) space of unbounded possibility that arises from the temporary suspension of “known limitations”. It is from this place that innovation and deep insights come. And that sometimes involves putting the carriage before the horse: being happy before we have any reason to. Following a whim. Dropping the safety net. Throwing everything out the window and going in a crazy new direction.

In an old Russian folk tale called “The Fool of the World” (sometimes known as “The Flying Ship”), with equivalents in many other European cultures, we hear about the youngest son of an old couple. This young man was, as some politely translated it, a “simpleton” – a world sometimes used to camouflage the Fool. Utterly clueless, and incapable of doing anything of significant import even around his own home. His own parents had given up on him, hopeless that anything would ever become of him and his poor mind. 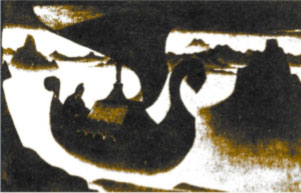 From the beginning of the story we also learn is that he is also very happy, always happy no matter what, strikingly unaffected by anything happening in his life, either challenging or pleasant, disheartening or triumphant.

This unlikely hero takes on the impossible task of bringing a flying ship to the king of their land, in order to win his daughter’s hand in marriage.

Needless to say, he succeeds in this quest, though not without a lot of help from a host of strange companions, representing various facets of shadow human behaviors, all redeemed in the right circumstances (fellows that none but a Fool would have accepted the troublesome company of, to begin with).

And so, where all had failed in this undertaking before, the Fool succeeded.

Like this charming character, the Fool brings “crazy wisdom” to situations, sometimes sidestepping “reason” and “common sense”. It stops or freezes the processes of the mind for a while, allowing a deeper understanding to emerge – an expression of a different faculty of intelligence than what is usually engaged during our daily lives and interactions. Some traditions purposely cultivate this form of “mind disruption” as a technique, like the Zen koans.

Additionally, the Fool is also sometimes required to facilitate a meeting with our shadows.

In the Lakota mythology there is a spirit called Heyoka, “the sacred clown”, that represents one of the facets of the divinity that challenges, asks difficult questions and awakens people by doing things backwards, in extreme, opposed to habit and tradition. A Heyoka has a consecrated role in the tribal life to ignore taboos, rules and boundaries, and, by so doing, to intentionally refresh, and thus keep alive, the understanding of their need and meaning, not letting them petrify into dogma or empty rites. To keep “collective shadows” from developing.

While everyone can meet the Fool, most will scoff at him or feel intimidated. For most of us, it takes a safe space, trust and deep courage to actually let him be in charge, even for a few moments. It is not only helpful, but imperative, to some extent, to invite and befriend in our own lives this archetype, a cultivator of mystery, of constant inquiry and personal understanding. Who, like Socrates in ancient Athens, can be a “gadfly” to keep us on our toes, questioning, so that we can remain in a flexible and continuously refreshed relationship with life.

We no longer have a sanctioned space to allow the Fool, the Heyoka, to enter fully in a therapeutic relationship, the way the field is structured and regulated right now. At least not in a fully expressed way – the way a shaman might, in a manner that can be very physical, shocking and disorienting.
But we do have access to some of the Fool’s tools. Anything that steers away from conventional expression and linear conversation in a seemingly exaggerated manner. After all, the Fool is also a Jester, the master of laughter and breaking monotony – and the enemy of formulas.

I sometime preface my own storytelling experiences by inviting the audience to imagine, just for the duration of our gathering, that they have no head (literally, to visualize themselves without a head), so that they can listen with their hearts instead, to be able to decode the striking metaphors in some of the tales. “And don’t worry”, I would reassure them, “you can put your head right back on when we are done. In fact, please don’t forget it here, laying around for someone to trip over…”

One-on-one, it can sometimes be very effective to abruptly change the course of the conversation or inquiry, or do something completely unexpected and out of keeping with the rest of the experience. It takes deep intuition and more than a little courage, but it can jam a mind lost in a loop or unhelpful train of thought, and jar it into a new understanding. The Fool uses humor to create levity and thus break through some of the heaviness and fog that may cloud insight.

Lastly, it can be immensely fun to experiment with it in our own lives, and practice in some of the casual conversations we carry. It is easy to overdo it, but mindfully used it can be profoundly liberating, and restore a sense of lightness and playfulness, which often may be what is missing to truly feel alive again.

On that note, a wisdom piece from some of the modern Fools:

A Zen master was once approached by a psychiatrist, after a public function they were both attending. The psychiatrist had been mulling on a question for a long time and decided to finally ask it.

“Exactly how do you help people?” he inquired.

“I get them to where they cannot ask any more questions” the Zen master replied.

ANDREI ARMEANU is a poet, storyteller and spiritual counselor with more than a decade and a half of experience in mindfulness, self-observation and deep inquiry practices. He has a passion for words, a soft spot for Shakespeare and a lifetime of studies in mythology and folktales. When he is not storytelling or reciting Rumi, Whitman or quoting the Bard’s work at private or public events as the StoryWeaver he can be found offering his support as a “Socratic friend” on a donation-basis (or Gift Economy) to everyone who needs it. Learn more at: www.ExaminedLifeCoaching.com and www.StoryWeaver.org