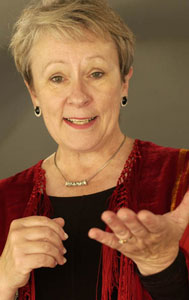 One fall I requested permission to perform Truman Capote’s “A Thanksgiving Visitor.” The representative agreed with the proviso that not a word be changed – an impossible request. The text required editing. In this case the editing was particularly important because of the age of the audience and the time available to tell it. That same week, a local newspaper advertised a theater company’s production of – you guessed it! – Truman Capote’s “A Thanksgiving Visitor.” I’d bet the production was neither word for word, nor any more “faithful” to the short story than my adaptation. Adaptations that strive to interpret stories faithfully for film and theater do not reproduce material word for word because they employ additional “languages” to communicate – so does storytelling.

Recitation and reading are not story-telling. Storytelling is a performance medium and a departure from the grammar of print. Live storytelling is primarily an aural event with physical components that serves a story most effectively by using all the verbal and nonverbal cues available to performers.

When I tell a story penned by an author, my goal is to communicate the appeal of the author’s unique storytelling, language and style. Yet adaptations occur, when I:

Lengthy descriptions, which can be delectable to read, can also become numbing in performance. But not always. Audiences let storytellers know when the narrative thread is lost to them. Responding to audiences recalibrates stories. Middle school students might respond to Ray Bradbury’s story of a boy losing his best friend as Douglas does in “Dandelion Wine,” but middle schoolers are not a nostalgic audience. Details that send adults into dim recollections can be an impediment to younger audiences. Forty some years of interacting with audiences might have led me to more informed decisions about editing material, as well as when to – and when not to – respond to cues from an audience, but it is a learning curve that never ends.

Balancing the literary tradition’s value of exact replication with the oral tradition’s more fluid definition of faithfulness to a text is like standing in the middle of a seesaw – balance is maintained by risking imbalance. There are those who would argue that great authors like Ray Bradbury and John Steinbeck do not need storytellers. Fair enough, but students do. Children, teens and adults need to hear their lyricism, power, and art out loud. The words of fine writers are not what most folks plug into iPods, yet most of us know a deep hunger for stories and the feast fine writers offer is without compare. So I will continue to try to establish connections with authors, and those who represent them, that allows penned literature to flourish out loud.

Recipient of National Storytelling Network’s Circle of Excellence Award, Carol Birch’s style revels in metaphors that rock, making literature conversational and compelling again. Adults want her to stay and kids want to know when she’ll be back. At the Baseball Hall of Fame, one man yelled, “That lady knows her s…!” – echoing the kid who said long ago: “She knows that story ’cause she was there.”

Join Carol Birch at the National Storytelling Conference Conference in June, where she’ll delve further into how storytellers can effectively prepare aurally satisfying stories from written texts. The workshop will offer information on clearing copyright through an examination of editing and ethical issues.