Hang on a minute – A mechanic can fix it.
My oil that’s brown, just has to come down
Through a little hole, right into a bowl.

There are different levels of trauma for children. Major trauma may arise from the death of a loved one, or a terrible accident, or from experiencing physical or emotional abuse. Minor trauma, especially for very young children, may be connected with many day to day situations and the challenges in learning everyday life skills – e.g. mastering the use of the toilet or potty.

I have recently used the above story rhyme about a little red car to help my two and a half year old grandson overcome a minor trauma and self potty train. It was a therapeutic story approach that I had not believed possible for a child so young.

When my son contacted me for some help, my first comment was ‘your child is not old enough for a therapeutic story’. But then I heard the full background to the situation: he had been using the potty for poos, but one day he didn’t get his pants down in time and poo went all over his legs and hands – after this, he would try to hold ‘it’ in, and he would shuffle to the nappy cupboard and cry out ‘nappy’ and only when he had a nappy on could he trust that poo would not go all over him. The changed situation was affecting his mood and behaviour in so many ways.

Realising how traumatic this situation was for this little boy (it had been four weeks since the messy incident and nothing had changed) I thought it was worth writing something, even though I had never before written a therapeutic story for a child this age.

I knew that his favourite toy was a little red car, and he was very interested in tools and fixing things. So this became the obvious starting point for the story. And of course, for a two and a half year old, it made sense to write it in rhyme. I was camping at the time, at a remote beach on the Australian coastline, with no computer and no internet connection, so all the communication was done on my phone via SMS (text) messages, including the story (my first SMS story!). After sending the story text, I sent one more message suggesting that an illustrated version could be vital for this young age. I also cautioned the parents to simply share the story with their son and leave the story to do its ‘work’ (and not to talk with him about the connection between an oil change and using a potty – such intellectualising of the situation could interfere with the story therapy).

The result was amazing – for the little boy and all the family! It was also very satisfying for me, both as a grandmother and a writer. His father had made a simple illustrated booklet of the text, and he loved it so much he wanted his parents to read it to him day and night. This went on for two weeks. Then one morning he picked up the booklet and went and sat on the potty with it … looking through the pages and repeating words from some of the lines to himself (oil – brown – come down – hole – bowl!) When he had finished doing his poo, he called for his mother and began singing the happy little red car song:

I believe the success of healing this little boy’s trauma was firstly due to the choice of the main character, the Little Red Car. I have never before written a story about a car, yet the influences in this child’s life cried out for this theme. As previously mentioned, the red car was his favourite toy, and he was living in the centre of Shanghai, where cars, roads and tall buildings dominated his landscape. If I had followed my usual approach and used metaphors from nature, I don’t believe the story would have had much affect in this situation. It is an interesting example of the benefits of meeting a child through his/her interests, and not always imposing my choices. 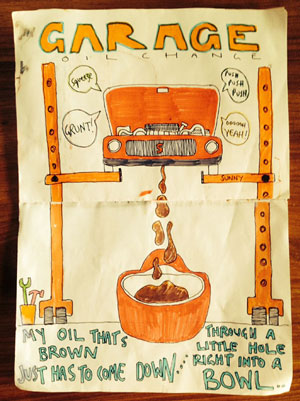 Secondly, the illustrated booklet made by his father helped give a necessary image for the metaphor of the ‘oil change’ in the story, something too conceptual to expect a young child to grasp. There is a drawing for each line in the story, with the red car looking very friendly and quite appealing to a child. But it is the middle section that I think proved the most important. In the image of the car on the hoist, the father had the inspired idea to draw the ‘bowl’ underneath the car the shape and colour of his son’s potty, and the oil coming down from the car into the bowl was sketched like falling lumps of poo. Without this, a child so young would most likely not have made the connection between ‘the oil and the bowl’ and ‘the poo and the potty’.

This wonderful therapeutic story experience with my grandson has inspired a collection on stories and rhymes for ‘Everyday Challenges’, some serious, some light-hearted, to help young children accomplish everyday life skills and overcome any possible associated traumas.

Therapeutic storytelling is a gentle, easy, yet often very effective means of addressing traumatic situations and topics with children. The story form offers a healing medium that allows children to embark on an imaginative journey, rather than being lectured or directly addressed about the issue. By identifying with the main character or characters, the child is empowered as obstacles are overcome and a resolution achieved. Working with an imaginative journey and a specific selection of metaphors, a therapeutic story approach has the potential to shift an out of balance behaviour or situation back into wholeness or balance.

Therapeutic stories can address a range of issues – from aggressive behaviour to grieving, anxiety, lack of confidence, bullying, teasing, nightmares, intolerance, greed, dishonesty… and much more. They also have the potential for nurturing positive values (sharing, co-operation, honesty, caring) and building emotional resilience and character (quests, overcoming obstacles, having to work hard to achieve a goal). 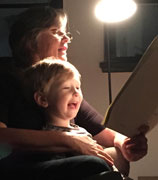 Susan Perrow, M.Ed.Hons, has an extensive background in teaching, writing and storytelling. She is based in Australia but travels internationally giving workshops and training seminars for teachers, parents and therapists – in Africa, Europe, the US, the UK, Asia and China. Her story work has led to the publication of two resource books – ‘Healing Stories for Challenging Behaviour’ and ‘Therapeutic Storytelling: 101 Healing Stories for Children’ (Hawthorn Press, U.K.). Both have been translated into several languages, including Chinese, Korean, Japanese, Portuguese and Croatian. ‘A Spoonful of Stories’, Susan’s e-book series, was launched in 2013 – you will find the link to this on her website – http://susanperrow.com/e-books/