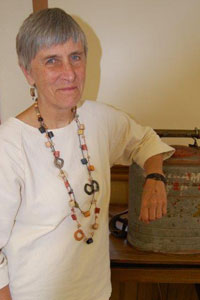 Part of the nature of man is to recompose a unity that has been broken.
In mosaic, I recreate an order out of shards.
— Mosaic master Marco de Luca

That’s what it feels like, to me, to set out to make a big, complicated story.  I start with heaps of shining bits – a little anecdote here, some essential facts there, a big gawky piece I just know belongs somewhere, a nickname, oral histories, a great line, miscellaneous fragments given by well-meaning friends – all sorts of stuff.  I don’t even know the shape of the frame I need to fill.  But I love those sparkles, the way they glint off each other.  I know that somewhere in those scattered shards an artistic story is waiting to be found.

Tesserae [the pieces from which mosaics are composed] are irregular, rough, individualized, unique.
— Terry Tempest Williams, Finding Beauty in a Broken World

I am not patient, and I am not comfortable with uncertainty and formlessness.  It is hard for me not to impose a pattern instead of taking the time to discover it.  But the integrity of the whole big story depends on being open to discovery, questioning any pattern that starts to seem obligatory.  So I first take the pieces, my tesserae, one by one, hold them up to the light, and see which ones are particularly bright for me.  What images are most vivid?  (“Images are like torches leading us through the dark,” says Jay O’Callahan.)  I spend a long time with those sparks: Why do I love them?  What essence of my story can they reveal?

Then I do some very pedestrian things.  Since I’m making a mosaic, I want all the fragments to be physical bits I can move around.  Small post-its work well; I write just enough words on each to identify an individual anecdote or image or piece of information.  Sometimes I color-code the bits (depending on my emerging knowledge of the story), perhaps for emotional tone (humor, horror) or for important characters or places, or for necessary background information (the mortar of the mosaic).

Probably this could be done on a computer, but I want the tactile experience.  I stick my post-its on a whiteboard in one configuration, photograph it lest I forget it later, then mess it up and try something else.  I play with patterns, juxtapositions, plot lines, always trying to jostle easy assumptions.  If the story is about a series of events or a life story, I think of all the possible alternatives to a chronological plot.  (Nothing wrong with chronology, but it should be a choice, not a default.)  If the story material is not overtly chronological, I see what some different kinds of clusters can reveal to me: stories from or about different people; different subject matter; moods/emotional tone; places.  Sometimes I arrange my tesserae in a sequence from my most to my least favorite.  Sometimes I look for the oppositions or extremes in the story (moods, weather, characters, activities, seasons, etc.) and see if I notice significant movement between them.  Loren Niemi’s New Book of Plots has also helped me jostle loose some ideas about arranging the fragments.

One tough thing about making a complicated story is that everything has to happen at once – there’s no single, methodical path from fragments to story.  I’ve talked a bit about plotting here, but plotting doesn’t really come before exploring the characters, or experimenting with points of view, or figuring out what and where the big transition(s) will be, or. . . .  Making a story is a recursive process.  It sends you back and forth over the same pieces, through the same questions, again and again, till – suddenly, unexpectedly – you know where you’re going with the mosaic.  And then there’s more labor, choosing, juxtaposing, excluding tesserae.  And then, there’s making it a performance.  To quote Jay again, “Creativity seems to be a combination of hard work and an openness to grace.”

What are your favorite ways of composing these big stories?  What obstacles do you find most daunting?

Jo Radner tends to make stories about the people and history of northern New England.  Short or long, her stories favor characters whose lives defeat simple explanations and situations in which gravity and humor are bedfellows.  She is most pleased with “Burnt into Memory,” a story created from many oral histories she gathered from survivors of the 1947 wildfire that destroyed the town of Brownfield, Maine.

Jo’s CD, Yankee Ingenuity: Stories of Headstrong and Resourceful People, received a 2013 Storytelling World Award.  In April 2013 she was given the Brother Blue and Ruth Hill Award from the League for the Advancement of New England Storytelling, “in recognition of extraordinary commitment, dedication and loving encouragement to the New England storytelling community.” She is past president of the National Storytelling Network.