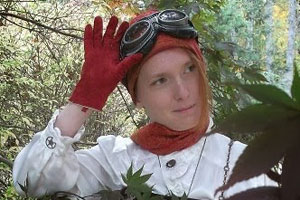 I’ll let the creator of the idea, Clare Muireann Murphy answer this one: “MythOff is an evening of mythology where the audience chooses the winners. It can pit Norse myth against the Irish, or Persian against Chinese. There are two or three rounds, and each round has a theme (Monsters/ Goddesses / Lost Love/ Bad Prophecy…the list goes on and on). Storytellers delve, audiences vote, and the prize for winning MythOff is usually something iconic and terribly cheap (like a plastic sword if you win the Best Dressed Warrior round).”

In short, MythOff is a story slam that features myths instead of personal stories. According to the mission statement, it “aims to revitalize mythology, bring new audiences and venues to storytelling, and promote international storytelling relations.” It also places the focus of the event on the stories, rather than the storytellers.

It is one of the core values of MythOff to tell the myths in their original form, without fracturing or parodying them. The audience is prompted by questions to make their decisions based on the story they heard, rather than the person that told it (“Which monster would you rather have guarding your house?”). These, and other guidelines together make sure that MythOff stays true to its original idea of education, entertainment, and the promoting of mythology told live.

MythOff was founded by Clare Muireann Murphy after the FEST (Federation for European Storytelling) conference of 2009. She developed her idea with the help of Love Ersare (Sweden) and Torgrim Mellum Stene (Norway). The worldwide premiere of MythOff happened in Stockholm in 2010, and featured four tellers with four mythologies.

Yours truly, excited and intrigued by the idea of bringing mythology to new audiences, joined the team as the MythOff USA representative in 2012. Since then we have had events on both sides of the Atlantic, from London to Johnson City, TN.

Excited yet? Good news! MythOff is a brand, much like The Moth. Events follow a set of rules and guidelines created by the founding team in order to stay true to MythOff’s original mission statement. Any storyteller who would like to organize a MythOff event can do so by following these few easy steps:

Part of the MythOff experience is reporting on your epic adventures after every event. Sometimes it involves a video or sound recording, sometimes it features posts on the organizers’ blogs. All reports are also linked to the official MythOff Facebook page (www.facebook.com/mythoff) for your viewing pleasure.

WARNING! Side effects of MythOff include: “An increase in mythic curiosity, a community for isolated storytellers, a widening of the typical storytelling audience demographic and a deep sense of the epically playful in all of us.”

MythOff Europe is curated by Clare Muireann Murphy. MythOff America is curated by Csenge Zalka. Please contact either of us if you would like to host a MythOff event!

Csenge is a professional storyteller and author from Hungary. A former Fulbright student with an MA in Archaeology and another one in Storytelling, she is currently pursuing her PhD at Bowling Green State University, OH. Her first book in English, Tales of Superhuman Powers, a collection of folktales featuring superpowers, was published in 2013.