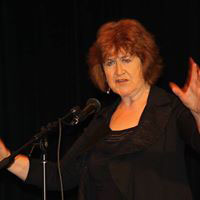 I have lived in Northern Ireland all my life. The first 18 years or so were uneventful. I was lucky enough to grow up in a house where stories were told. Many were about my family’s adventures in India during the late 1930’s when my father was a career soldier and of course I heard lots of true stories of the Second World War. Going to an all Protestant state school where we learned mostly British history I had no sense of my “Irishness”.

In 1969 everything changed, not just for me, but for all the people in my country. I started university in Belfast and that autumn saw the start of the Civil Rights Movement and then, sadly, a cycle of violence, of bombs, shootings and mayhem that was to last for the next 30 years. Living in Belfast I saw first-hand the results of carnage and when I became Children’s Librarian for the city I ventured into places most people in my town only heard about in news headlines. I met people of all shades of political opinion and learnt that blood is the same color on both sides of the religious divide. I met widows and bereaved children who wept the same tears. I told stories in jail to men whom some hailed as heroic freedom fighters and others regarded as terrorists and murderers.

Following the Good Friday Agreement in 1998 the stage for set for a peaceful resolution to “The Troubles”. Those political prisoners were released no matter what their crimes,and in fact many have since gone into politics here and hold important positions. But all of this has left a legacy. Within our community there are ordinary people who still carry hurt, secrets and pain. For them there is no moving on and there can be no justice or peace as long as the killers of their relatives go free, whether those are civilians or members of the security forces.

So, how can stories help? If people take the time to listen to another’s story they are paying them respect. Even if the other person holds views which are diametrically opposed to our own, the very act of listening to their stories is important. It acknowledges them as members of a shared society. In post-conflict Northern Ireland other prejudices are emerging – racism, homophobia. There is still much work to be done to build a new future for our children but to do so we have to acknowledge what went on in the past. History cannot just be air-brushed.

Over the years since 1969 I have listened to thousands of stories, stories which have helped me develop more fully as a person able to understand those whose beliefs are very different from my own. In my workshop in Phoenix I hope to explore practical ways in which the sharing of difficult stories can be encouraged and supported.

We in Northern Ireland are indeed emerging, blinking, into the sunlight of peace.