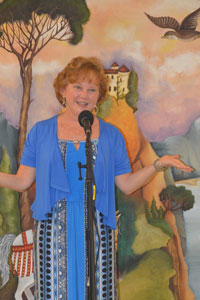 From the moment my students stepped into the room for the after school storytelling program, ‘after school’ being the operative words, I was already at a disadvantage. By then they had been sitting at their desks for almost five hours, with only 20 minutes for recess, barely any time at all to add movement and play to their day. How could I keep them motivated through 13 weeks of class, especially for those students who return year after year?  I quickly learned that play and movement were two key ingredients.

While I began to create different worksheets to help them sequence and visualize their folktales, I knew it was equally important to get them on their feet, let their bodies feel the stories. Sometimes it was a combination of both. One of my newest creations, Exaggeration Station, was a perfect marriage of the two. The objective is to encourage them to play with the elements of their story.

I prepared a worksheet for the students to complete before the game, which mirrored the nine poster boards placed around the room; this gave them a chance to think through their choices. Since we were in the school library I used the book stands for the poster boards, placing them on the shelves, no higher than eye level. They were organized in a pattern that wove them up and down the aisles so the children could easily move through the game. We immediately followed up with Walk the Talk, another movement activity, and they quickly incorporated what they discovered while playing Exaggeration Station.

More than once I’ve reconfigured a childhood game into a new classroom activity. Sometimes inspiration comes in an instant in the most unexpected places. One day I was working with my third grade storytelling troupe. We were using the school hallway for a version of The Virginia Reel. Rather than standing still and facing each other, they were paired up, walking side by side, one teller sharing their tale with their partner. As they were executing the activity I suddenly noticed two girls reach out to hold hands. Immediately, the memory of an old schoolyard game popped into my head and a brand new activity, Red Rover, Red Rover Send Story Right Over, was born.

Another day we began by completing my written exercise, Language Ladders. Immediately after finishing their worksheets I cued up the music and we began to “Dialogue and Dance!” By merging the tactile exercise of writing, then quickly moving to an interactive game utilizing their new story dialogue, it reinforced and stimulated their work.

After fifteen years of teaching I still continue to think about new ways to bring movement into the classroom. It’s no surprise we all love to play so why not incorporate as much as possible into our day and play with a purpose!

Want to add some more play to your classroom, to your storytelling? Register for my workshop, Story Play, at the National Storytelling Conference this summer; I promise we will have fun, and chocolates!

When she isn’t writing or telling stories Karen is teaching and coaching the next generation of storytellers. Her award winning book, Story by Story: Creating a Student Storytelling Troupe, is based on teaching the art of Oral Tradition to over 500 students. Her greatest joy is watching a shy child transform into a confident performer.

Karen produces and hosts the television series the Story Café in Massachusetts, offering colleagues the opportunity to share stories and highlight the unique diversity of their work. She is also the co-founder of Once Upon a Generation, an intergenerational storytelling project with storyteller Andrea Lovett.

4 thoughts on “Play with a Purpose”