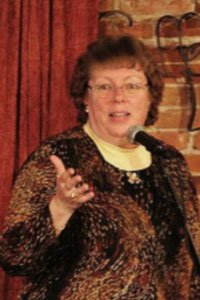 You remember Marilyn Monroe, right? It seemed to me that there had been so much publicity about her, that I had to know everything there is to know about her. However recently I was very surprised to read that Marilyn Monroe had changed Ella Fitzgerald’s life by making a phone call. Did any of you know that? OK – so I’ll tell you the story.

It started in 1953, as Marilyn was preparing for the film “Gentlemen Prefer Blondes,” a musical. She was advised by her vocal coach: “Buy Ella Fitzgerald’s recording of Gershwin songs and listen to it a 100 times.”

Marilyn wasn’t really into jazz at that time. But she became a fan of Ella Fitzgerald’s by listening to her record, over and over. 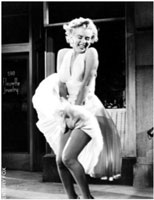 Marilyn went on to star in several other smash hits including“ The Seven Year Itch” you remember, where she wore that white halter dress and stood on top of a subway grate to get cool one hot summer night. AND Marilyn continued to buy and listen to records by Ella Fitzgerald.

Finally after two years of listening, in 1955, Marilyn just had to make that phone call. Marilyn was now 29 years old and a Hollywood superstar. Ella was 38 and, after 20 years of performing, was still singing in small, second rate jazz clubs – you know, dingy places with sticky floors where the air reeks of smoke and spilled beer at the beginning of the evening.

It was 1955 when Marilyn changed Ella’s life.

Marilyn called the owner of a Hollywood nightclub, the club that Clark Gable, Charlie Chaplin, Humphrey Bogart and Lauren Bacall frequented, the one where Frank Sinatra had made his Los Angeles debut in the 1940s.

It was 1955 when Marilyn told the nightclub’s owner:

“I’ve never seen Ella Fitzgerald perform. I want you to book her for a week immediately.”

“If you do, I will take a front table every night. The press will go wild.” 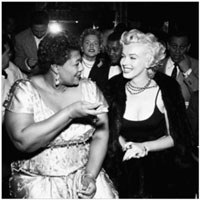 Marilyn kept her word – she was there, at a front table, every night. The press did go wild.

Ella later said, “I owe Marilyn Monroe a real debt. After that, I never had to play a small jazz club again. She was an unusual woman – a little ahead of her time.”

As you probably know, Ella went on to have a long career – singing in all the first class venues – thanks to Marilyn.

As you probably also know, Marilyn did NOT have a long career. After 1955, she made the movies “Bus Stop”, “Some Like It Hot” in addition to several others.

In 1962, Marilyn gave her last interview, just several weeks before her death at age 36. Marilyn pleaded with the Life Magazine reporter: “End the interview with what I believe.”

He, or his editor, didn’t. Instead, the article ended with Marilyn talking about fame: “If fame goes by, I’ve always known it was fickle. So at least it’s something I experienced. But that’s not where I live.”

Here’s how Marilyn wanted that article to end – here’s what she believed:

“What the world needs is a real feeling of kinship. Everybody: stars, laborers, Negroes, Jews, Arabs. We are all brothers.”

Did you know that was what Marilyn believed??? Me neither.

Now I wonder what else we don’t know about Marilyn Monroe.

A storyteller and a producer of storytelling events, Kate specializes in true stories about people who made a difference. She firmly believes in this Norwegian saying:  “It is the duty of the present to convey the voices of the past to the ears of the future.” Don’t miss Kate’s workshop at the 2014 National Storytelling Conference, July 24-27 in Phoenix/Mesa, AZ: “People Who Made a Difference: Stories of Fire and Light.” This workshop will focus on how to find inspiring historical people, research their lives, and create memorable stories about them.