“You matter because you are you, and you matter until the last moment of your life. And we will do everything we can to help you, not only to die peacefully, but to live until you die.” — Dame Cicely Saunders

Dame Cicely Saunders, (1918-2005), founder of the modern hospice movement, shared these words. In fact, they became the mantra for her work with the terminally ill. Her vision for a permanent home that provided fully rounded care for the dying was her lodestar, and nothing and no one, would deter her. Through her work, her teachings and her prolific writings, Dame Cicely changed the face of hospice and palliative care around the world.

Two years ago, my friend Laurie Hutchinson asked me if I knew any prominent women in the hospice movement. “Yes,” was my immediate reply, “Cicely Saunders, our foundress.” I was sitting at my Mac and googled Dame Cicely, and up popped a photo of an older English woman, in a bright red jacket and wonderfully alive eyes. “There she is,” I exclaimed, “my new story.” And that is exactly how my exploration of Dame Cicely Saunders started.

I’ve been sharing stories for over seventeen years, and I’m particularly passionate about celebrating the stories of women who prepared the way for all of us. I had heard of Dame Cicely in 2001, when I first started volunteering with hospice, but knew very little about the woman or her work. Then Wendy Potter, a friend and fellow hospice volunteer, offered her help. We meticulously gathered information, facts, letters and essays written by and about Cicely. Dame Cicely was a most enthusiastic correspondent, writing over seven thousand letters to colleagues and friends, from 1949 through 1999. The stories came flooding our way. Our greatest challenge was to create a focus. Wendy and I decided to work around a series of themes: Cicely’s early childhood, her nursing career, medical school, and certainly her main vision, the founding of St. Christopher’s Hospice in London, England. We also included some of the challenging issues of the time, such as euthanasia, and the controversial idea of “total care” of the patient. After months of research and re-writes, we arrived at a final draft: Cicely, The Life and Work of Dame Cicely Saunders. Wendy portrays the role of the Narrator in the story, presenting significant historical information and background details. I portray Dame Cicely herself, at age eighty, as she embarks on yet another round of teaching, travel, and public speaking engagements, “spreading the word of hospice,” as she so often declared.

The process of creating and presenting Cicely was a first for me, on many levels. Usually, I work alone, do all my own research, writing and story sharing. This time, I was co-writing a story with a partner, Wendy; we would also share the telling of the story, and thirdly, we decided to include a short Power Point on key places and characters in Dame Cicely’s illustrious life. A far stretch from traditional storytelling indeed! But as tellers, we need to do what is best for the story. Then, Wendy and I previewed (or “work-shopped”) our story with a group of local tellers and writers and received valuable input. This workshop process has become a standard practice for me in exploring all new stories, and really is helpful, both from a writing and presentation point of view. We launched the sixty-minute story at our own local Nanaimo Hospice as a fundraiser in November, 2013. This past May, 2014, we presented Cicely to two other Vancouver Island communities. Several presentations are scheduled for fall, 2014.

The following is an excerpt from our story:

The Life and Work of Dame Cicely Saunders.
©Margaret Murphy and Wendy Potter 2014

Narrator: It’s my pleasure to introduce to you Dame Cicely Saunders. She will be talking with you about her life and work.

Cicely Saunders: Good evening. Death is not the Great Unmentionable. We need to think about it, and we need to talk about it. For 50 years I have been caring for the dying, as a nurse, a social worker and a physician. And I speak from personal as well as professional experience. Three years ago, my beloved husband Marian died in St. Christopher’s Hospice in London England, the very hospice I founded, and where I still work today. But our story begins long before St. Christopher’s.

When I was a young nursing student, many years ago, an elderly woman called me to her bedside. She motioned for me to come even closer. “May I speak with you?” she asked. I pulled up a chair and sat down beside her. “How can I help you.” I asked. Her voice was a low whisper, and she said to me: “I don’t know which is worse: the fact that I am dying or that nobody wants to look at me.”

We are not ostriches, yet we often behave like ostriches about death and dying. This can only lead to more pain. The so-called tactful silence on the subject of dying, the avoidance of mentioning death is, in reality, neither tactful nor kind. When someoneis dying or in fact, has died, and we pretend that nothing has happened, that everything is just as it was, we degrade/dishonor the life that was lived, as well as the death that ended it. But I didn’t know all that back then. I had to work all that out.

Narrator: Because of the problems with her back, Cicely couldn’t practice nursing, so her very first job in the late nineteen forties was working as a lady almoner (social worker) at St Thomas’ Hospital. She was doing rounds and just left the bedside of a middle-aged gentleman who was dying. The doctor took her aside and virtually hissed at her in great frustration: “Will the lady almoner please cope!” he said. What he was really saying was: “Will you please get this patient out of my beds. Send him somewhere, anywhere, just get rid of him. There is nothing more I can do.”

This doctor’s attitude was typical of that time. Medicine was about cure, about answers. And most doctors felt they had no answers for the dying. Death was seen as a defeat; it made doctors feel like failures. So sadly, they came to shun their dying patients, to relegate them to ‘the room at the end of the hall.’

Of course this hasn’t always been true. Before WW II, doctors often had to say, ‘There’s nothing more we can do,’ because it was often true. After the war, the use of penicillin and other antibiotics spread widely, saving the lives of millions of people, which made doctors feel like heroes and paved the way for the neglect, even disdain, shown to dying patients.

From a personal perspective, sharing Cicely has changed me. All stories do, of course. But sharing Dame Cicely’s message has opened me further. In the beginning, I was terrified and filled with doubt. Could I honor this woman? Can I even come close to getting the feeling and meaning of her remarkable legacy? And working with a partner, how would that be? And the PowerPoint! What on earth were we thinking to include photographs in a storytelling? Fear. All of it: fear. And it came burbling to the surface. The fear is not new, nor particular to this one story. Always, in the early stages, some form of doubt floats through and around me. But that all changed after presenting Cicely. Her powerful story helped me move forward. But I was surprised by the audience reaction and response.

Wendy and I decided to include a “Question and Answer” session at the end of each presentation of Cicely. Our piece is full of information, some of it new and controversial for many, as was the great Dame herself. But instead of asking questions, our audiences started sharing stories. They shared their own reflections and experiences and fears around death and dying. They opened their hearts and spoke about their beloved uncle or mother or daughter who passed away. They felt safe and they shared of themselves. Is this not the goal of storytelling? Are we not as tellers, coming with story gifts in hand, to offer our hearts? And in doing so, we help others do the same. My awareness is widening. The listener shares my own doubts and fears. The listener may also need someone to initiate the story-sharing. But mostly, the listener needs to feel safe, before she, in turn, becomes the teller and is heard. Wendy and I heard stories right after our show, and sometimes days later via e-mail or phone calls. The ripple effect of story sharing was happening. It is now clearer to me. Storytelling is a remarkable tool for creating a space for story sharing.

Today, I breathe even deeper into the Cicely story. The fear has subsided. I am more awake and open to the circle of story sharing. In fact, it has become my life blood. 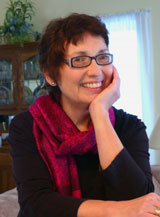 Margaret Murphy, MA, is passionate about sharing story and helping others find their storytelling voice. An educator, speaker, writer, and professional storyteller, she now weaves story into every facet of her life. Margaret has developed educational and community story programs across Canada for the past seventeen years. Co-founder and member of Nanaimo, BC’s, Around Town Tellers, Margaret offers story sessions, courses and workshops to build community. margaretmurphyspeaker.com