Once upon a time, there was a handful of little plastic pellets called Rustle. All Rustle longed for was to be useful. He dreamed of being a red umbrella or a yellow raincoat or a plastic toy…
Then, one day, he got a job.

He loved his new rustling sound [rustle rustle] but all Rustle longed for was to be useful.

The next day, the moment Rustle had been waiting for all his life arrived. At last, he would be useful!

He was on the metal hooks by the checkout
and he was being filled up with shopping for a family!

They loaded him up with
oranges, sausages, sushi, lollies, lemonade, salami, balloons, strawberries in plastic, chocolate and noodle cups…

When the family got home, they unloaded the shopping, then they folded Rustle and his friends up and put them away.

The family re-used Rustle many times until one day…
he got so worn out that a hole appeared in his side.

The family said:
Oh dear, this one is no use anymore- we can’t even wrap the dog’s poo in this bag!

So they tossed Rustle into the bin. They didn’t know that if you really have to use a plastic bag then when you throw it away, it’s a good idea to tie a knot in it first.

Soon loads of smelly things landed on top of Rustle (and since the family didn’t have a compost system, there was food as well like…
rotten eggs (pause)
pizza cartons with anchovies (pause)
coffee grounds and chicken bones (pause)
some rotten prawn shells in a plastic bag, (pause)
a stinky old shoe (pause)
and as if that wasn’t bad enough, then came
a pooey plastic nappy!

Someone had forgotten to flush the poo down the toilet
before they put the nappy in the bin!
Rustle couldn’t wait for bin day.

To Rustle’s great relief, when the tip truck emptied the rubbish out, he landed on the very top.

There was a bit of a breeze and it picked Rustle up and he began to dance along the ground. Then the breeze turned into a wind and soon he was dancing …
a little higher
and a little higher
until he was flying above the trees
flying gracefully in a playful gust of wind.

Suddenly, the wind dropped… Rustle fell into the gutter, landing among: cigarette butts, plastic drink bottles, popper straw wrappers, lolly wrappers, bits of noodle cups and balloons and even some friends of Rustles from the factory.

Poor old Rustle lived in the gutter for a long time… dreaming of flying.

Rustle was floating free further and further out into the Pacific Ocean! As he floated out he noticed he had company- all his friends and cousins were coming too: chip packets, lolly wrappers and drink straws…

A bunch of jellyfish swam by. With his body all swollen with water and his handles hanging upside down like tentacles, Rustle looked just like a jellyfish, so the jellyfish let him swim with them.

He felt a song come over him:
GURGLING underwater sound
“I like to be under the Sea, in a jellyfish’s garden in the shade…” (Tune of Beetles ‘Octopus’s Garden’)

Just then along came Shelley, the Leatherback turtle.

Shelley was just returning from a looong journey to Fiji where she had laid her first eggs.
So now –ohh she… was… HUNGRY- very, very hungry.

Shelley’s very favourite food – was jellyfish tentacles- so she went hunting! She nibbled the tentacles off Rustles new friends and then she spied the biggest shiniest jellyfish she’d ever seen…mmm- Rustle!

A current swooshed Rustle away and Shelley missed. She chased him again and Rustle frantically flapped his handles. She missed again but then on her third pass she caught Rustle.

But when Shelley nibbled on Rustles tentacles, all of that shiny but strange tasting jellyfish went down into her stomach.

[swallow sounds] Straight away Shelleys’ tummy felt bad.
With Rustle blocking her tummy up, she couldn’t digest her food.
[sad sound] When she needed to let wind out, it couldn’t get out because Rustle blocked the way.

Shelley got so ill that barnacles grew on her shell. Then she washed up on the beach.
Shelley lay in the Sun feeling worse and worse. A big human and a small human were walking on the beach.
They came over to see.

Kid:  Oh wow Dad it’s a sea turtle. I’ve never seen one up close! It’s so big!
Dad: Yeah, but come to think of it, it doesn’t seem quite right to see a turtle here in the day time. I don’t think this turtle is well.

Along came the Marine Rescue Workers
[hero music: dundun ] The carers put Shelley to sleep and operated on her to get Rustle out of her stomach, which made Shelley feel a lot better. 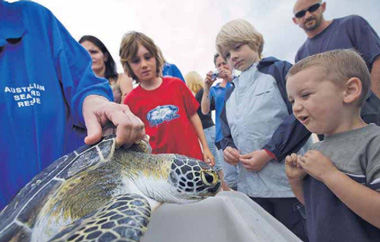 After three months, Shelley was well enough to go back to the Sea. Shelley had been very, very lucky to survive swallowing Rustle. Many of her cousins were not so lucky.
The carers waved her goodbye calling
“Good luck Shelley and don’t eat any more plastic will you?!”

As for Rustle, he asked the marine carers if he could please be made into something really useful, because that’s all he’d ever wanted all his life.

The marine carers scratched their heads and said “We’re sorry Rustle, if you were still clean and in good shape, we could send you to be recycled into something useful, but you are dirty and torn and there aren’t any machines yet that could make anything with you.”
“Oh dear” said Rustle. “I wish I’d never been made!”
Rustle began to sniff.
“Well yes, it would be better if we humans didn’t make plastic bags in the first place. You don’t mean to, but you and your friends cause very serious problems for all the creatures in the Sea.”

One of the carer’s had a little girl who heard this conversation and she spoke up and said “I know how Rustle can be useful Mum! You could use him in a story!”

And so they did.

Whenever the Marine Rescue Workers were invited to speak to groups about turtles and wildlife, they would show a photo of Shelley and hold up Rustle and then they’d tell the story of
‘Rustle the plastic bag and Shelley the Leatherback turtle’.

That’s not the end of the story really, because lots of plastic rubbish is still ending up in the Sea and lots of creatures large and small are still swallowing bits of plastic.

But you can help change that story.

You can think of Shelley every time you go shopping. Next time your family go shopping, say:

“Stop! Have we got our Eco Bags???”
Take lots, because you always buy more at the shops than you plan to…
You can help by picking up plastic rubbish when you see it especially if it is near a drain or water. If you really have to use a plastic bag or if you pick one up from the street, tie a knot in it before you put it in the bin and …remember the drain is just for rain!

Shelley and Rustle, How I tell it
by Jenni Cargill-Strong

I find ‘Shelley and Rustle’ generally works best for children over 5 years. Younger children will listen but may not get it fully. I use two props: a plastic bag and a toy sea turtle. I use some audience participation in the story. When Shelley starts eating jellyfish, I get a child to hold Rustle (the plastic bag) and I hold my toy version of Shelley the turtle. I put the child at one side of the stage and me at opposite end and I make Rustle swim quickly towards Rustle- a bit like a toreador scene, with the child flapping Rustle and Shelley lunging at him. We do this three times, swapping sides each time and on the third sweep Shelley swallows Rustle. That child sits down then (to thanks and applause).

I used to also get children to be the rescue service, but without being able to rehearse first this sometimes slowed the story too much and made it cumbersome, so now I do all that part myself. The story would work well for students to enact like a play with one student as narrator.

If time it is great to have a discussion about plastic bags and the sea as the idea of using plastic is so entrenched that it is very hard for people to shift away. I have sometimes had kids proudly volunteer that they recycle their plastic bags to hold the rubbish. This misunderstanding: that using as much plastic as you want is OK, as long as you recycle it, is insidious. Australia is one of the highest per capita users of plastic bags in the world.

Here is a link to the way I tell it via Bandcamp: https://storytree.bandcamp.com/track/shelley-and-rustle-2