Listen to the story 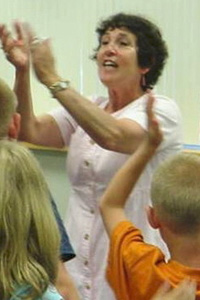 I have always loved “Obedient Jack” and “Epaminondas,” but they didn’t feel like stories I could tell. Then one day, as luck would have it, it came to me – what I needed was a Jewish version. Jack and Epaminondas were shlemiels – inept bunglers who try to do the right thing and fail. So I came up with Shmuely, a poor boy who lives with his Mama in a small Jewish village called a Shtetl. Before World War II there were hundreds of Shtetls in Eastern and Central Europe that were destroyed during the Holocaust. The people in the Shtetls spoke Yiddish, a blending of medieval German and Hebrew. In telling my story, I hope to honor the people who lived in those villages, familiarize my audiences with a few words of Yiddish, and have a lot of fun doing it. I love seeing the kids’ expressions as they anticipate Shmuley’s next misstep. When I tell the story, we practice saying, “Loch in Kopf” (Hole in the head), which is what Shmuley’s Mama says every time he gets Mama’s instructions wrong. “Loch” is spoken with a strong guttural “ch” and audiences love to say it.

Award-winning storyteller, author, and teaching artist, Judy Sima has been featured at conferences and festivals, schools and libraries throughout Michigan and across the country. A retired middle school librarian, she has introduced many young people and adults to the art of storytelling. Judy’s book, Raising Voices: Creating Youth Storytelling Groups and Troupes, co-authored with Kevin Cordi, is a “must have” for anyone working with youth tellers. She is also featured in the DVD series Story Watchers Club and the August House Book of Scary Stories. A past NSN Board member, Judy is the current President of the Detroit Story League. See more of her stories on her website.