“I suppose there was folks worse hurt than a bullet to the leg, for the surgeon left that part of the tent.  And when he did, I saw, on a table nearby, a pile of bandages.  So I grabbed as many of those bandages as I could hold, and I slid out the back of the tent—right underneath the tent fabric there—and I pulled myself far back into a thicket, so’s I was well hid, and I took off my belt and I clenched it between my teeth to keep myself from cryin’ out…” 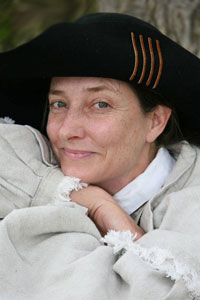 Deborah Samson, Revolutionary War soldier, describes removing a bullet from her own leg to a group of fifth graders.  Some are wide-eyed and slack-jawed.  Others squirm and cover their ears.  Then they eagerly ask her why she enlisted, how she hid her gender, what it felt like to get shot, whether she regretted her decision to enlist.  They leave with a deeper understanding of the events that led to the Revolutionary War and the experiences of the people who lived through it, because they’ve heard it from someone who lived through it.  They’ve “heard it from the horse’s mouth.”

Fifth graders often tell me “I hate social studies, but this was really cool!”  And if I happen to bump into them several years later, while visiting a middle school, they say, “You’re that lady that did that thing about that woman who fought in the American Revolution!”  They remember.

Character interpreters tell personal stories, while portraying the people whose stories they tell. While this powerful technique is usually used to tell historical stories, it can also be used to raise awareness of current issues like homelessness, AIDS, terrorism… If our listeners are to remember our stories, and perhaps be moved to action, we must connect with them on an emotional level.  Data, dates and facts are not usually memorable unless the listener can see how the information applies to someone they “know.”

Historical novels, documentaries, and good museums show this. Some museums, such as Colonial Williamsburg in Virginia, Conner Prairie in Indiana and Plimoth Plantation in Massachusetts, allow visitors to converse with costumed interpreters who portray people from the past. Many teachers have their students portray historical figures, and others do so themselves.  Can you imagine how much more attention you’d have paid in school if your teacher had put on a costume and become Albert Einstein or Malcom X?

I especially enjoy telling the stories of people on the losing sides of conflicts.  Those stories expose listeners to new information and perspectives.  They challenge listeners to think about what they would have done under similar circumstances, rather than to simply parrot the textbook versions of events.  Life is messy, and outcomes only look inevitable in the rear view mirror. In the past, as now, most conflicts weren’t between good guys and bad guys, but between ordinary people who disagreed about how to solve their problems.  Just like us, they longed for a crystal ball to show them what to do.

Character interpretation allows our audiences to touch our common humanity.  It reminds us that, despite our differences, the core issues that are important to us—the quest for love, the need to care for our families, the desire for freedom—are transcendent.

Darci has told stories in character since 1995, both at Colonial Williamsburg and through her own business, American Lives: History Brought to Life™. She portrays almost 20 women from American history, from an indentured servant in the 1750s to Amelia Earhart in 1928. She tells the stories of Unionists and Confederates, Loyalists and Patriots, adventurers, reformers, entrepreneurs, and a Royal Governor’s wife.

Darci was the Founding Director of the “Legacy” character interpretation scholarship program at Bethel University in Tennessee.  She performs in character in schools all over the country, and trains teachers and museum educators to teach through character interpretation.  Let her show you how to use this powerful storytelling technique at her workshop, Stepping into the Story Through Character Interpretation, at the NSN Conference in Richmond.

2 thoughts on “Stepping Into the Story Through Character Interpretation”