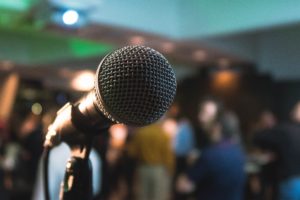 Hands sweaty, shifting back and forth between nervous feet, Jessa Usery, a sixth-grader at Elkmont High School, looked out from the stage at the Athens Storytelling Festival into a sea of young faces. She drew a deep breath, leaned into the microphone and began to spin a tale that drew gasps and groans of disbelief from the crowd.

For the first time in Athens Storytelling history, eight local students were invited to perform during the festival’s designated student days. Usery, having won a story-writing contest at her school, was one of them.

She drew her inspiration from a weekend road trip to Charleston, North Carolina. The trip started easily enough but took a bizarre turn when the family nearly ran over a grizzly bear sitting in the middle of the Atlanta freeway. In measured tones, Usery explained how they startled the hulking creature when they attempted to swerve around it, prompting the bear to stand to its full height and give chase.

Sneaking a glance at the crowd, Usery pulled them in further by saying, “no matter how fast we drove, the bear kept pursuit, scratching wildly at the doors and windows.”

Having learned a thing or two from the professionals, like make frequent eye contact with the crowd, don’t move around too much and keep them engaged, Usery confronted the microphone and screamed, “Bear!”

“They were really entertained when I did that,” said Usery, who likes the idea of making a hobby out of storytelling. “It was actually really fun, and I think I could get used to talking in front of a crowd like that.”

Usery ended her tall tale by assuring the crowd, many of whom weren’t quite sure if her story was fact or fiction, that the story “was really all just a dream.”

“Having the opportunity to be part of something like this (storytelling) could become a career for someone like DaKota,” she added.

When asked to come up with a story for the festival, McKinney knew just which memory to unlock. Drifting back in time to an ice cream parlor whose name he has long since forgotten, McKinney told the audience his granddaddy brought him there as a reward for learning how to subtract.

He said there was a pretty girl there, about 17 or 18, and he started doing all these things to get her phone number. But in the end, she declined to share it with him.

“Of course, that was the part of the story that wasn’t true,” McKinney said. “But I wanted to share something important by including the part about the girl.”

His story offered an important lesson.

“There are plenty of opportunities in the world, plenty of fish in the sea,” he said. “Just because you miss out on one, there will be plenty more opportunities out there to make up for it.”

McKinney said he was overcome with a sense of fear when he first stepped on stage, mostly because he didn’t know how the crowd would receive his story. His fear turned to calm as soon as he started telling.

“I realized I was really happy when I was telling my story,” he said. “I would definitely do it again.”

Leah Oakley, the bookkeeper at FAME Academy at Brookhill Elementary School, chose Reece Boyett and Holland Wood, both sixth graders at the school, to be representatives at the festival.

“I think she thought I might be good after I was the emcee at last year’s talent show,” he said.

Judging by the crowd’s reaction Thursday, Oakley’s instincts were right.

Elaborating on a story passed down from his grandfather, Boyett told of a rather unsettling night when his grandfather’s Pontiac was chased by a wolf on U.S. 31.

“My older brother, Rush, shot the wolf in the ear, and I hit the wolf in the forehead,” Boyett told the riveted crowd. “The wolf tripped and fell into a ditch, and then ran off into the woods.”

“But don’t worry, it survived,” Boyett said. “His head was so hard the bullet ricocheted right off.”

The crowd of students enjoyed his story so much, they gave him a standing ovation.