I’ve done table-hopping a number of times and always found it worked well, particularly when it is a sit-down dinner. In fact, it is one of my suggestions for a gig like a company’s annual dinner party. My reasoning is that, unlike a theatre gig where the audience have consciously chosen to come to listen, here people are probably less interested in devoting a lot of time to me. Telling to everyone can easily be disruptive of what they want from the evening and so one is more likely to have them continuing conversations around the tables.

My normal arrangement is to have the organiser introduce me to everyone at the end of their welcoming speech. I then tell a short “adult” type of tale, e.g. The Tailor and his Wife. That always goes down well and only takes about 8 minutes. I then tell them that I have *lots* more tales – some to laugh at, some to wonder at, one or two to make their blood run cold! I’ll be going from table to table during the evening and if they’d like a story, I’ll be happy to oblige.

And that is it. I usually take a chair with me so I can easily join a group at a table. Often people actually notice me coming and already make room for me.

Sometimes I can pick up on a remark I hear and say, “That reminds me of a story …”. Other times I repeat the formula and ask whether they’d like a tale to laugh at, to wonder at, or to make their blood run cold. I always have a mental list of about a dozen tales to hand but it is often that I tell the same four or five to most of the tables. Most ask for a comic or a “blood run cold”. Comic is easy as I have so many around 5 to 8 minutes. Blood-run cold – I might tell a ghost story but often it is Mr Fox – a bit longer but *so* effective.

I might do another round of the tables again later in the evening. If it seems appropriate, I might tell one final tale to the whole group to round the evening off – but that can be less effective if a lot of drink has been consumed!

Occasionally a table will show that they are in the middle of an important conversation. Then it is easy to drift away again, saying that they can have a tale later if they wish. I’m not imposing, nor is their need to continue what they want to do an outright rejection of me as a performer.

My only caveat is that this works best for a sit-down do. I have occasionally done it in a stand-up party setting and have never been so happy with it. Somehow the dynamics are different. Perhaps at a house-party, it would work if you are introduced and tell one of your strongest tales, then invite guests to get another from you in the course of the evening. 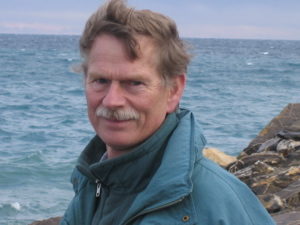 Born in Chesire, England, Richard Martin now tells stories throughout Europe and as far away as India, Singapore, Hong Kong and America – in theatres, universities, schools, for business companies or private parties.

RIchard says: At the advanced age of 25, not knowing what else I could do, I recalled George Bernard Shaw’s dictum and decided to become a teacher. I compounded this mistake by deciding to teach primary school children: the logic that being larger than the pupils would make life easier was soon disproved in practice.

After 18 months of being an over-stressed teacher in a small North Devon town, I chose to follow my fiancée back to Germany for a year. That year began in December 1976 and has yet to finish.