Katie Knutson is our New Voices chairperson who shares her articles for Storytelling Magazine on our blog to inspire a place for discussion and follow-up.  Comments encouraged! 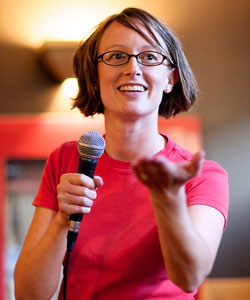 Storytelling is the most effective tool I have found for teaching, connecting people, fostering understanding, and building community. When in a community, individual storytellers unite others, ask great questions, and seek deeper truths. However, as a community with an on-going debate over the definition of storytelling, we can be perceived as exclusive and unchanging. At the same time, storytelling organizations keep asking how to bring in younger members. We cannot simultaneously be welcoming and exclusive.

Allegra Lingo, a Minneapolis artist who describes herself as “a writer who writes stuff and says it on stage,” found herself on the receiving end of this debate. One day an established traditional storyteller told her that she did not have a right to call herself a storyteller – a label given to her by others – since she read her work on stage. He told her, “It goes against everything that storytelling stands for.” Lingo internalized his words and stopped going to coffee shops and open mic nights. Not one to give up entirely, Lingo focused on her own work and avoided existing storytelling organizations.

After becoming a successful fringe festival performer years later, Lingo brought together several other solo performers and created the Rockstar Storytellers, a performance company that now performs monthly, hosts an open mic, has a stellar marketing campaign, and successfully cross-promotes the shows of all their members to increase their audience base. Like the Moth, they are one of the groups creating a hip new image of storytelling. The Rockstar Storytellers keep their distance from the organizations that came out of the storytelling revival unless individually invited to perform or present workshops.

In contrast, Katherine Glover, a writer, performer, and storyteller, felt welcomed by the same storytelling community that had rejected Lingo five years earlier. Two storytellers sought her out after seeing a performance. “They were trying to bring in new types of styles and actively pursued me ,” Glover explains. “They did warn me that there might be some conflict [in the definition of storytelling], but I never felt rejected.” Glover has made a substantial impact in her local storytelling organization by serving on the board, organizing and managing committees, redesigning and maintaining the events calendar on the website, and helping expand their Tellabration!™ from a day-long event to a two-day festival.

How did these two people have such different experiences within the same community? There are many possible factors, but in each case, one or two people represented an entire community with their words. They stood on opposite sides of the spectrum within the same organization and spoke for the entire group.

While there is a real value to the oral tradition many of us prize, prohibiting other storytellers from joining us because their styles vary only ensures the demise of local, regional, and national storytelling organizations. As Glover suggests, “Keep an open mind. There is always something you can learn from people. Take the best performers from different sides of the spectrum, and put them in the same show. It exposes new people to traditional styles, and traditional tellers to new styles. Embrace controversy and create dialogue.” Lingo adds, “Everybody has a legitimate way of doing what they do. It doesn’t make anyone better to shoehorn them into one style or another.”

Glover reminds us, “It feels good to be part of a community.”

If you are a storyteller under the age of 35, what helped you feel welcomed by the storytelling community? Did the debate over the definition of storytelling get in the way? If you have been around for a while, what have you done to create community with younger storytellers?

Katie Knutson has spent more of her life as a storyteller than not. She holds a degree in Theatre and spends her days working in schools using theater and storytelling to teach literacy, playwriting, acting, improvisation, and teamwork. She leads a variety of workshops for adults, including voice and movement, and has served extended terms on the boards of Northstar Storytelling League and Northlands Storytelling Network.