RETOLD by LAURA SIMMS. ©Laura Simms 2012
Based on a Pygmy story from South Africa
Please ask permission before telling this story. Contact: 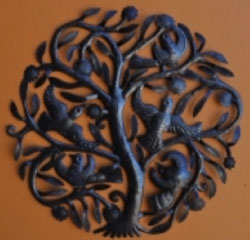 Long long ago the most beautiful bird in the world lived in a thick forest.   Everyone knew that the beautiful bird brought the rain.  When she spread her wings, rain fell.   When she folded her wings, there was no rain.  People honored the bird with songs, dances, ceremony and story.  Sometimes people offered food as a gift for the bird.  Because of this, there was always rain. For we all know that without rain there is no life.

In the earliest times, the bird was always remembered. But time passed and things changed as things do.   People built cities and gardens, houses and walls. They grew more busy. So certain people at certain times were chosen to remember the bird. She didn’t fail to spread her wings and bring the rain.

However, there came a time when people forget about the bird. They cared more for their work then for the rain.  They thought  it was foolish to believe that a bird could bring  rain.

But a beautiful story can not be forgotten. Children told the tale of the beautiful bird. They  learned the songs and the dances.  They made pictures and told their own stories.  Children played as if they were the bird spreading their wings and washing the world with fresh water.  The bird, the most beautiful bird in the world, spread her wings and brought the rain.

Time time passed as time does.   People told their children that the story was not true.  “It was foolish,” they said, “to pretend that a bird can bring  rain.”  There came a day when no one sang the song. No one remembered the stories or the dances. No  one brought food to the forest.   So, the beautiful bird, the most beautiful bird in the world, folded her wings and there was no rain.

“It will rain soon,” people said. But the rain did not fall. The earth grew dry.  Fields grew fallow. There was little to drink and nothing  grew.  Mothers and Fathers did not go to work in the fields or the cities.  Hunger and sorrow  stalked the world.  People argued with one other. They blamed one another. The bird, the most beautiful bird in the world, was not remembered. So she did not spread her wings.

One day there was a curious child who went walking in the forest.  She went to search for water.  She saw the most beautiful bird on the branch of a tree.  Its’ wings were folded. It looked very thin. The child ran home and begged her mother to give her a small piece of bread for the bird. The mother was angry, “We have hardly  food for ourselves. How can we give a bird something to eat?” But the girl begged and asked over and over, until the mother grew tired of her asking, and just to keep the girl quiet, she gave her a small piece of bread.

The girl ran into the forest.  She offered   the bird the piece of bread. That night there was a little rain.  Everyone was pleased.  . The girl said, “It rained because I gave a bird a piece of bread.”  They hushed her voice,  “Do not be foolish. That is just a story.”

The next day , however, she ran back to the forest. She thanked the bird. “You are  the most beautiful bird in the world.”  She went back home and begged her father for bread.  The man grew weary of her asking again and again. He gave her the tiny piece of bread, just to keep her quiet.  She went into the forest and fed the bird. That night there was more rain.

The next day she begged her father again, “Please give me another piece of bread. I have to feed the bird so it will rai.”  This time the father was upset.  He took a piece of bread in one hand and a bow and arrow in the other. He said, “Show me this bird!”

Sadly, she went into her house.  On the wall was an mbira (a thumb piano). She took the instrument of wood and metal that her grandfather had made. She took it outside.  She sat on the earth and began to sing. She sang an old song about the most beautiful bird in the world that had brought the rain. She sang and she sang and she sang. And the sound of the mbira, the fingers of the gods, resounded.