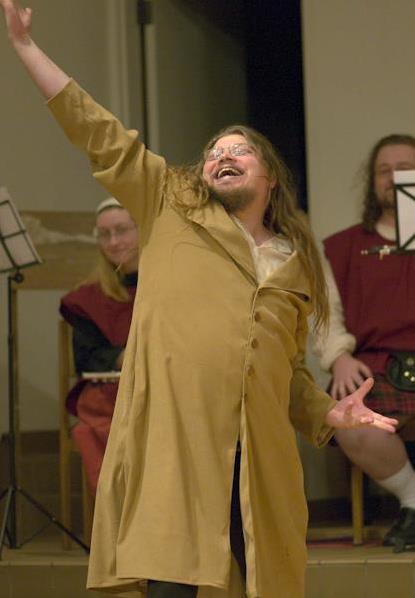 Originally composed for a variety show while I was a member of the Medieval and Renaissance Performers Guild at OSU, I tasked myself with creating a tragedy to contrast with the primarily comedic acts making up the rest of the program.

This adaption of the traditional selkie legends uses a rhythmic verse structure intended to be reminiscent of the ebb and flow of ocean waves in order to elicit a greater sense of pathos, along with a call-and-response mechanism based around an evolving meaning of the sigh.  In other words, it’s all kinds of sad. It seems to have worked since an audience member wept at its second performance.

My longtime fascination with verse narratives, such as those in the Poetic Edda, was a big influence on this piece. This was actually my second attempt at a verse piece, preceded by an experimental work titled “The Estate of Richard Feuerbach,” which I devoted much time to while living in Berlin as part of my interest in Richard Wagner’s writings on the Gesamtkunstwerk (synthesis of the arts).  The most enjoyable part of these works for me is the opportunity to play with the interaction between sound and narrative.

I’m a young storyteller currently telling at the Ohio Renaissance Festival for its 2012 season. I may be considered unusual as a storyteller who composes and remembers stories based primarily on sound and concepts; it is rare for me to write anything down. My natural inclination as an artist is always to do something interesting rather than safe or smart. My newest show is “The Best Misteaks I’ve Made,” a program of true stories about finding the right path in life through making wrong turns, which I expect to premier later this year.