© Gemma B. Benton
I went to sleep believing that the morning would provide new hope and a positive
new direction. Instead, I awoke to what I considered an inconceivable nightmare and
devastating reality. I was stunned. More than anything I felt a deep betrayal. I felt betrayed by
my country but also my own false hopes.  At that moment, it was less about who had been
elected and more about the fact that there was a larger collective who had voted in favor
of continuing the cycle of hate, violence, and trauma that our country was founded upon. My
own hope for change had been crushed and the hope for the generations to come had been
broken into a million pieces, trashed and destroyed. What I held sacred had been desecrated.I fumbled through the rest of my day. Not doing much but trying to do something, anything, that felt normal. Make coffee. Fold clothes. Wash dishes. Sweep the floor. It felt meaningless. Ridiculous rituals meant to create order in a world that felt completely upside down, inside out, insane.

Uninterested in doing anything else I sat down with some watercolor paper and began to make lines. That felt safe and known. Comforting. Usually, art and writing is a way for me to better understand my life, to draw inward and make meaning in my life. That day, the truth is I didn’t care. I didn’t want to make sense out of any of it. I was hurt, betrayed and enraged as
much by those who I felt had voted to reinforce an abusive system as by my own need to feel comforted and safe. Ironically I realized that it had been our own human need to feel “safe
and protected”; that was used to manipulate us and justify the abuse of those who desperately sought our “safety and protection”. It all was so sick and distorted.

I began to spill my thoughts and feelings onto paper, at the same time wanting more than ever for nothing to appear on the page. I wanted the page to magically absorb the chaos, the anger, and betrayal that I felt. To absorb my pain as I scratched and scrawled and smeared paint onto the coarse paper.  And for a while it did. There were blobs of gray and black everywhere.
For several hours, I was satisfied for it to continue being that way.
A great splotchy, gray mess.

Then from out of a patch of smeared gray paint, I saw a strangely angled foot.  I began to draw lines, observing patterns creating form. I was afraid of what was appearing on the page. What would it mean? What would it say about me? About the future? I convinced myself that it was only a drawing and continued to follow the lines and allowed the spaces to be filled in
with color.

About half way through I recognized him. The twisted roughness. That smug, half smiling snout.  Coyote. There he was in full color on my page hisred party cup in hand celebrating his victory. My mind flashed back to the old stories I had heard from Native elders. Those people and places who spoke his name, not in playful
teasing but as a warning.  Thief. Liar. Foolish Mess Maker and Havoc Wrecker.

In Shoshone, Coyote is “Bia Ishappah” which means Big Liar. When Shoshone people pass
a dead coyote on the side of the road, we brush ourselves and say,

As if brushing away his ghost and sending it far, far away. I sat there in my living room
staring at this image that I had painted, thinking about what it all meant and then I
remembered a story.

A Shoshone Creation Story: Wolf Tricks the Trickster
The Shoshoni people saw the Wolf as a creator god and they respected him greatly.
Long ago, Wolf, and many other animals, walked and talked like man. Coyote could talk, too, but the Shoshoni people kept far away from him because he was a Trickster, somebody who is always up to no good and out to double-cross you. Coyote resented Wolf because he was respected by the Shoshoni. Being a devious Trickster, Coyote decided it was time to teach Wolf a lesson. He would make the Shoshoni people dislike Wolf, and he had the perfect plan. Or so he thought.
One day, Wolf and Coyote were discussing the people of the land. Wolf claimed that if
somebody were to die, he could bring them back to life by shooting an arrow under them. Coyote had heard this boast before and decided to put his plan into action.

Wearing his most innocent smile he told Wolf that if he brought everyone back to life,
there would soon be no room left on Earth. Once people die, said Coyote, they should
remain dead.

If Wolf takes my advice, thought Coyote, then the Shoshoni people would hate Wolf,
once and for all.

Wolf was getting tired of Coyote constantly questioning his wisdom and knew he was
up to no good, but he didn’t say anything. He just nodded wisely and decided it was
time to teach Coyote a lesson.

A few days after their conversation, Coyote came running to Wolf. Coyote’s fur was
ruffled and his eyes were wide with panic.

Wolf already knew what was wrong: Coyote’s son had been bitten by Rattlesnake and
no animal can survive the snake’s powerful venom.

Coyote pleaded with Wolf to bring his son back to life by shooting an arrow under him,
as he claimed he could do.

Wolf reminded Coyote of his own remark that people should remain dead. He was no
longer going to bring people back to life, as Coyote had suggested.

The Shoshoni people say that was the day Death came to the land and that, as a
punishment for his mischievous ways, Coyote’s son was the first to die.
No one else was ever raised from the dead by Wolf again, and the people came to
know sadness when someone dies. Despite Coyote’s efforts, however, the Shoshoni
didn’t hate Wolf. Instead, they admired his strength, wisdom, and power, and they still
do today.

The Aftermath
In those moments after the Election, I felt disconnected and disempowered. I felt re-victimized
by a system that not only did not represent me but sought to harm me. I felt even more
displaced, disenfranchised and discarded than I had before. And I was not alone.

Winona LaDuke a respected Native writer, activist, mother and grandmother explains a Native
American perspective of power in this way.

“One of our people in the Native community said the difference between white people
and Indians is that Indian people know they are oppressed but don’t feel powerless.
White people don’t feel oppressed but feel powerless. Deconstruct that
disempowerment. Part of the mythology that they’ve been teaching you is that you
have no power. Power is not brute force and money; power is in your spirit. Power is in
your soul. It is what your ancestors, your old people, gave you. Power is in the earth; it
is in your relationship to the earth.”

Many of us felt the weight of this loss. For many, this was a re-wounding of very old, even
historic wounds. I knew my tears and the anger were not about this event alone but reflective
of the generations of hate and violence perpetuated on women and people of color. Our tears
are the tears and the rage our ancestors were forced to suppress and hide. They are the
tears and the rage that we not only are obligated to express but must if we are to heal and
survive.

Although I find that I am guarded against false hopes and easy answers I do see good things
happening in our communities. We have been changed. I hear a gravitas in our voices when
people speak. We are silent to easy answers and push towards the deeper work that is
needed most in our communities. People are coming together and talking about what is
uncomfortable yet meaningful.

Story is a key element to not only talking about the pain and loss we experience but also as a
way of collectively grieving and integrating our experiences. Story is a way of reconnecting
with the wisdom and strength of our ancestors, it is a way of making wisdom and power inside
ourselves and with each other. Not in spite of our pain but as a direct response to it.

I know that I am clearer and maybe even more committed, not to a hope that people want
change but with an understanding that we are changed by what causes us pain. Coyote’s way
of making medicine in the madness. 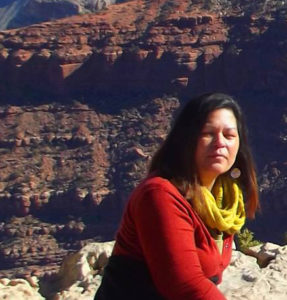 Gemma B. Benton is a traditional Native American singer, storyteller, activist, artist and author. Recently, Gemma joined the Healing Story Alliance as our new Coordinator and is excited about furthering healing story at this important moment in history. Throughout her work, Gemma shares stories and wisdom gathered during her twenty-seven years of working in Native American and indigenous communities with spiritual leaders and healers.