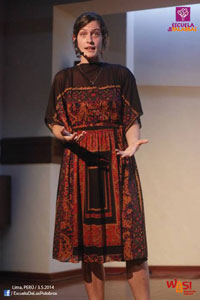 “Ay Dios! Mira el pajaro!” (My God! Look at the bird!) The words flew out of my mouth as I stared out into the audience of the Delfus Bar in Lima, Peru. I was performing, in front of strangers, in Spanish! The moment that thought flew through my mind, my Spanish vocabulary disappeared. I stood there, my arms outstretched, What was the next word?! Oh! I was in my story, but without the right words I was forced to adopt some other modality of expression—I began to sing and twirl around. This impulse turned my story into a new experience. The story was about a grumpy old man whose hip ached, who learned to laugh (and sing!) from a little bird. In that moment of lost words, the song inside my grumpy old man was exposed, and in turn exposed the true essence of the story. The song was a mish mash of Spanish and English words, but mostly just sounds of joy and elation at becoming free of confines—the old man’s aching bones, and my own limitations with language.

The performance was a showcase of women storytellers who had participated in a workshop through La Escuela de Las Palabras (the School of Words), a Lima based group under La Asociación Cultural Wasi, a Peruvian non-profit. My first two weeks in Peru I attended workshops with the director of La Escuela, Peruvian storyteller Wayqui Cesar Villegas. At the time, my Spanish was still warming itself back up after years of non-use. I listened to stories, played theatre games, and was pushed to do things in Spanish that I am normally comfortable doing in English—such as perform for an audience and rehearse new stories with partners. What initially felt like a limitation became a unique tool for exploration and creativity in my storytelling. I had to find other ways to get across what I wished to convey to the audience, and in so doing, I found in myself and in my stories new and untapped potential.

Performing in Spanish also uncovered the deepest, most gut wrenching stage fright I have ever experienced in my life. I had sought out storytelling professionals who could teach and train me. One such individual, Edwin Eduardo Ortiz Espiritu, a storyteller of the Yanesha, a Pre-Incan indigenous group of the native community of Tsachopen, reminded me that even professionals experience fear and uncertainty. He told me that when he first began on his storytelling path, he was afraid. He woke up to the tiger that was his fears each morning, but he made un pacto con sus miedos, a pact with his fears. He recognized the necessary lessons fear had to teach, and in return his fear agreed to let him go forward towards joy and success.

I faced my tiger of fears by performing in front of audiences in a language not my own. What I learned was that by just doing it, by performing despite my fear of failure, or lack of language, I had found my storytelling path. The path of bilingual exploration and creation gave me the strength, confidence, and courage to try and to fail, and to make a pact with my fears, to push forward and succeed. There is not one storytelling guru, or person who knows all, there is just me, my tiger of fears, and my choice to stand up, look that tiger in the eye, and shake hands.

Have you ever told a story in a new language? Share your story below.

Celine O’Malley is a storyteller, poet, comedian and educator in Chico, CA. Founder of Chico Story Slam!, producer of the first Chico Tellabration!, and founder of the newly forming Chico Story Guild, Celine is passionate about bringing young and old together through story and using the art of storytelling to further social justice work around the world. Search Facebook for Celine O’Malley.