When stories are doing their best work, when they are working their deepest magic, they touch us deeply and they stay with us for a long time. As we listen to their wisdoms, stories open paths of well-being into our natural world. We get to know our neighbors, the Animal People, the Rock People, Mother Landscape…. We are connected through stories and so through stories comes spiritual health for us all.

The following story, drawings and photos tell of my first visit to the Modoc homeland near Tule Lake, California. 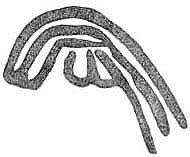 “It was here that Koomookumpts, Modoc creator, made the world from the water of Tule Lake, reaching five times to scoop mud from the bottom and spreading it around to make the land.”

For thousands of years the Modocs have gone on vision quests, sleeping in Koomookumpts’ Bed, seeking power. The stone bed, at the top of a rock rising from the desert basin near Tule Lake, is the sacred center of the Modoc world.

It was here that Koomookumpts, Modoc creator, made the world from the water of Tule Lake, reaching five times to scoop mud from the bottom and spreading it around to make the land. He shaped and decorated the world the same way a Modoc woman shapes and decorates a basket. When Koomookumpts was done he crawled into his bed and his spirit sleeps there still. Here is where the world began and where the visions of her people are created, and where they live on.

When I was eleven, I first visited Lava Beds National Monument near Tule Lake. I was a Boy Scout. The sight of lava flows and volcanoes, marshes and caves and sagebrush and junipers, the night eyes of deer browsing through camp, the hooting of owls under a moon that stared hard and cold onto the desert landscape — these visions slipped into my dreams, leaving pictures in my memory which are vivid to this day.

The initial excitement of that first trip was the campfire ceremony during which we first year scouts were inducted into the highly secretive Order of the Modocs. But as I crawled through caves and climbed cinder cones, I suspected that the ceremony was a rough imitation of traditions that stretched back further than memory.

As I stared at the quarter mile of ancient symbols carved into the cliff at Koomookumpts’ Bed, I had no idea of the mythic significance of the place. I read the sign that dismissed the symbols as graffiti or primitive doodling, standing behind a chain-link fence that did little to protect the carvings from vandals with guns.

I knew there was more to this rock. Eagles and red-tailed hawks lived here, and jackrabbits and deer and coyotes. The carvings seemed as natural a part of the cliff as the nests of owls, and less out of place than the fence and the sign. The symbols meant that Indians had lived here.

For an 11 year old Boy Scout, that was good enough for me.

At a time when lake water still lapped the lower cliffs of the rock, a man climbed to the top and had a vision. We know his story because he carved it, using traditional symbols, on a lower cliff that faces east.

He steered his canoe through tules bent over by red-winged blackbirds guarding their nests, past yellow pond lilies the Modocs call wocus. He landed the canoe and started up the ancient trail to the top of the rock.

Once there, he saw that the top was a model of the world. A ring of cliffs circled the rock like mountains and in the center was a pond. The water was caught in an ancient crater, a memory from when this rock was an underwater volcano and the level of Tule Lake was much higher. But it was also a memory from when the world was nothing but water, before creation.

The man circled the rock, following the cliffs, looking out on the world through gaps, until he came to the pond. He waded through mud toward the center, and then he dove. Five times he struggled to the bottom. On the fifth dive, he swallowed water and imitated Koomookumpts, scooping mud from the bottom.

The man walked east to the stone bed, lay down and closed his eyes. And there he remained for five days and five nights. He had no food, no fire, no blankets. And most importantly, he was alone.

The communal thinking of the village, that fluid confusion of primal knowledge and voices and dust, had been left behind. Here the thinking was harder, more intense.

He felt the gnaw of loneliness. A cold wind blurred the sharpness of the stars. The moon lit the nights like a tribal fire. Coyotes howled down the rock. But the man didn’t feel the cold. He didn’t hear the coyotes. The singing of his heart had taken over. His vision had started.

Thousands of Modocs before him had climbed the rock and slept in Koomookumpts’ Bed. One by one they felt the winter wind sting their eyes as they watched coyotes dance in the purple twilight on the frozen surface of Tule Lake.

Thousands before him had felt the shift of the seasons from winter to spring. Rafts of mallards and pelicans and coots replaced the ice on the lake. Snow lines climbed the mountains. The south wind warmed the basin into desert heat.

One by one they climbed the rock as the days cooled into fall. With the first snow the people gathered around fires in the winter lodges and sang and danced and listened to the myths. The orphan boy Gaukos became the moon. Coyote stole fire for the people. Koomookumpts traveled beyond where the sun and moon live to bring his dead daughter back to the land of the living.

Just before dawn on the fifth day the man’s vision cleared. From the top of the rock he saw his village on the south shore of Tule Lake. Dozens of winter lodges covered the basalt-and-sagebrush peninsula that jutted into the water. Smoke rose in thin streams from smoke holes, mixing with layers of morning mist, then spreading south over the rough landscape of lava flows, toward volcanoes that would again puff smoke while the Modocs called this village Gumbat, Village Among the Rocks.

The barking of geese started the morning. The sun rose over Koomookumpts’ Bed, turning the snow on Mount Shasta orange, spilling into ravines on the eastern ridge. These ravines were the ones Koomookumpts carved with his fingernails so water flowed down the mountains and filled rivers and lakes.

The day moved into the laughter of children, the slow drumming of women pounding wocus seeds into flour in stone bowls, the shouts and bustling of men preparing to hunt. The wind blew the lake surface into waves that bent the reeds on the marshy shore.

Morning burned to midday heat that slowed the pace of village life. In the sluggish rhythm of afternoon, there was no hint that centuries later, U.S. Army troops would build rock fortifications over the mounds and pits of the abandoned village. There was no hint they would attack the last band of Modocs left on their traditional land, nor that the Modoc leader Kientpuash, Captain Jack, would be imprisoned at Koomookumpts’ Bed after his capture, at the same place the Modoc world had started. On that typical afternoon in the village, there was no hint of the strange irony to come, that an ancient lifestyle would come to an end at the rock where it had begun.

The day dimmed toward evening. Under the opening of stars and the rising of the moon, the man started back down the trail. Walking away from the stone bed, his thoughts filled with the lonely memory of his vision and the urge to go home and rejoin the communal rhythms of daily living.

Five days later the man returned to the rock and carved the story of his experience into the base of the cliff. But his carving did not reveal details of his vision. That would have betrayed the spirit that was to become his power for life. He simply canoed home to his people, with the focused eyes of a man who had been touched by the creator and shared his visions.

Since that first visit as a Boy Scout I have returned to Lava Beds, season after season, year after year. I have slept in Koomookumpts’ Bed and have felt the wind that carved the upper cliffs carve images into my dreams. The pond is dry these days. But one warm night, under a sky blazing with the fire of stars, I walked through the center of the crater and felt cold air surround me with the sharpness of a vision. And I drank the cold air, like water.

As a storyteller, I have learned to listen. I have discovered that each word, each breath of silence, each subtle gesture, every gaze into the soul of every story, is sacred. I have learned to open my heart and my senses to what may be possible. In this spirit, I journey into wild places where stories draw breath. Drawn by some scrap of scribbling, a conversation with a friend, some strange and wonderful sound, a mound or knoll in the landscape, I pause in the place. I settle in. I listen carefully.
— From “John Beeson’s Ghost” by Thomas Doty
Read Online: http://www.dotycoyote.com/library/beeson.html

THOMAS DOTY, a native of southern Oregon, has been telling stories of the natural world for over 32 years. His family background is Irish, English, Takelma and Shasta. His European ancestors were Mayflower passengers whose descendants traveled the Oregon Trail, settling near the Rogue River in the 1850s. His Takelma and Shasta ancestors were from the native village of Coyote’s Paw along the Klamath River near the Oregon-California border. He received a Distinguished Lifetime Achievement Award from the American Indian Program and is the author of a highly acclaimed series of Doty & Coyote stories. In 1986, Doty co-founded and currently co-directs Reading the Rocks, a project dedicated to protecting and interpreting native rock carvings and paintings. Thomas Doty has been called “A Cultural Treasure,” “A Master of his Art” and “One of the Best of Oregon’s Storytellers!” http://www.dotycoyote.com