A story from Sudan, retold by Allison Cox.

Long ago, when the world was new, the Creator called all the creatures together and told them, “The earth is filled with wondrous places – go out and find the place that you would call home.” 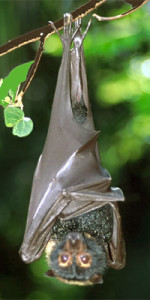 Now – to celebrate their new home, the animals decided to have a party. Word went out that the animals would all gather that evening in a nearby clearing. When Bat heard about the party, he was very excited. He got so busy brushing his fur and shining his wings! And when he finally arrived, Bat fluttered to the branch of a nearby tree and looked down toward the clearing. Ooooh! All the animals were having a good time!

There were all sorts of tasty foods and sweet drinks laid out for everyone. And the animals were making their own music. Some were playing drums and reeds, roaring, barking, bellowing, howling and trumpeting – everyone singing. There were dancing in a line and stamping their feet. The place was hopping! Bat shivered with anticipation and fluttered down to the entrance where Zebra stood guard.

“Stop right there, Bat!” neighed Zebra. “Where do you think you’re going?”

“We-, We-, Well into the animals party…” stammered Bat.

“Oh no you don’t! This party is ONLY for animals and YOU are NOT an animal!”

“And you’ve got wings! Only birds have wings. Now get out of here before I stomp you!” Zebra raised his hoof and Bat quickly fluttered out of the way, back up to that tree.

He sadly watched the animals feasting and singing and dancing… and the tears began to run down his fur, all the way to his feet. And Bat began to slip this way and that way… until he slipped all the way around and hung upside down. Bat was too sad to care. He just stayed upside down and his tears fell down to the ground.

Well, when the birds heard about the animals party, they decided this sounded like a great idea. They decided to have a party of their own! When word went out that all the birds would gather that night in a nearby clearing, Bat thought, “Now’s my chance to have some fun!” He spiffed himself up, shined his wings, buffed up his feet – he was ready!

He fluttered over to the clearing and landed in a nearby tree. The party was already in full swing. There were tables of wonderful seeds and berries and big seashells filled with sweet nectars to drink. The best singers of the bird kingdom were hooting, cawing, whistling, warbling and crooning away. The long legged birds were high stepping with the smaller birds dancing between their legs. And everyone was shaking their wings – feathers flying everywhere!

Bat couldn’t wait to get in there! He fluttered down to the entrance where Vulture stood guard.

“Evening Vulture” Bat said nonchalantly as he hurried inside.

“Stop right there, Bat! You can’t go in there!”

“You also have dark fuzzy fur and sharp little fangs,” hissed Vulture. “Birds have feathers and beaks – not fur and teeth. Now get out of here before I peck you!” And Bat barely missed being pecked by Vulture as he quickly fluttered back up to the tree.

Bat was still trembling as he sadly watched the birds feasting and singing and dancing… and the tears began to run down his fur, all the way to his feet. And Bat began to slip this way… and that way… until he slipped all the way around and… hung upside down. But Bat was too sad to care. He just stayed upside down and his tears fell down to the ground.

And ever since that day, Bats have always stayed to themselves, and they only go out late at night when most of the other creatures are asleep. And they still hang upside down – so their tears will fall to the ground – to this very day.

(c) Allison Cox 2002
My source for this tale is “The Party” in One Day We Had To Run by Sybella Wilkes, Brookfield, CT:Millbrook Press, 1994. In this book, refugee children tell their stories in words and paintings. Abraham Marial Kiol, an fourteen-year-old boy from the Dinka Bor Tribe of Sudan told Wilkes this tale. He ended with: “Tell the children of the world. We don’t want to be bats. We want to find our place. To be either an animal or bird so that we can be happy.“